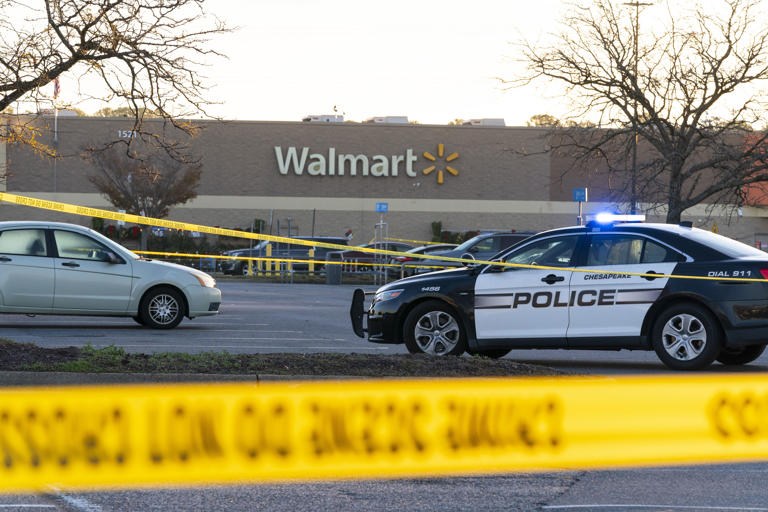 Law enforcement at the scene of a mass shooting at a Walmart store in Chesapeake, Va., early Wednesday. (Alex Brandon/AP) © Provided by Yahoo News US

A Walmart employee opened fire inside a store in Chesapeake, Va., on Tuesday, law enforcement authorities say, killing six people and wounding at least four others in the nation’s latest mass shooting.

The suspected gunman, who was not publicly identified, died of an apparent self-inflicted gunshot wound, Chesapeake Police Chief Mark Solesky said at a news conference on Wednesday morning.

“We are truly sad about the tragedy that took place in our community last night,” he said. “We are all praying for the family, friends and co-workers of everyone that’s affected by this senseless violence.”

Solesky said police responded to a 911 call shortly after 10 p.m. local time on Tuesday evening. Officers arrived on scene within two minutes and entered the store.

Police uncovered a pistol at the scene.

There was no clear motive for the shooting, Solesky said. Police have already executed a search warrant at the suspect’s residence, and the investigation is ongoing.

Briana Tyler, an employee at the Walmart, said on ABC’s “Good Morning America” Wednesday that she was still “processing” what unfolded at the store.

Tyler said she and other employees were gathered inside the break room before their overnight shift when her manager appeared.

“I looked up and my manager just opened the door and he just opened fire,” she said. “He just started shooting throughout the entire break room. I watched multiple people drop down to the floor, whether they were ducking for cover or they were hit.”

Tyler said he fired in her direction but missed.

“He looked directly at me,” she said. “But luckily he missed my head by an inch or two.”

Tyler said that the gunman “did not say a word” while he carried out the killings.

The shooting comes just days after five people were killed and 17 others wounded at an LGBTQ club in Colorado Springs, Colo., on Saturday night.

In a statement, President Biden condemned the killings, which come just days before the Thanksgiving holiday.

“Tomorrow is Thanksgiving, one of our most cherished holidays that brings us together as Americans and as families, when we hug our loved ones and count our blessings,” Biden said. “But because of yet another horrific and senseless act of violence, there are now even more tables across the country that will have empty seats this Thanksgiving. There are now more families who know the worst kind of loss and pain imaginable.

“Jill and I grieve for those families, for the Chesapeake community, and for the Commonwealth of Virginia, which just suffered a terrible shooting at the University of Virginia this month,” the president continued. “We also mourn for all those across America who have lost loved ones to these tragic shootings that we must come together as a nation to stand against.

“I signed the most significant gun reform in a generation, but that is not nearly enough,” he added. “We must take greater action.”