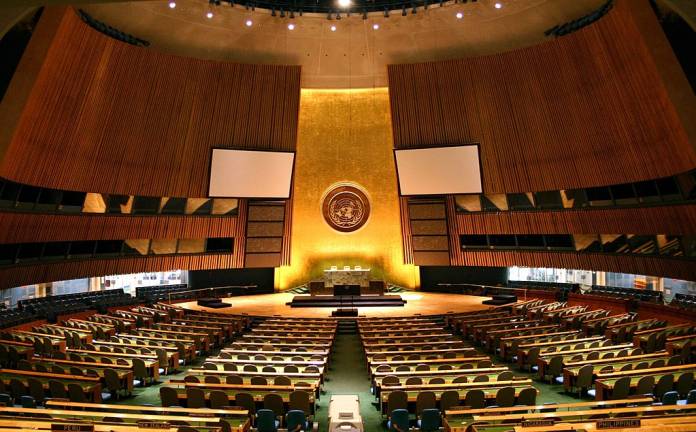 President Joe Biden will condemn Russia’s “naked aggression” against Ukraine in an address to the United Nations General Assembly on Wednesday.

Mr Biden, who is due to speak at 10.30am local time, will also announce support for countries impacted by food shortages that have resulted from the invasion.

“He’ll offer a firm rebuke of Russia’s unjust war in Ukraine and make a call to the world to continue to stand against the naked aggression that we’ve seen these past several months,” White House national security adviser Jake Sullivan told reporters.

“He will underscore the importance of strengthening the United Nations and reaffirm core tenets of its charter at a time when a permanent member of the Security Council has struck at the very heart of the charter by challenging the principle of territorial integrity and sovereignty,” Mr Sullivan added.

Mr Biden’s speech comes a day after Russian president Vladimir Putin announced a partial mobilisation of 300,000 reservists as his forces struggle to regain their footing after a series of Ukrainian victories on the battlefield.

Russia’s war in Ukraine dominated the first day of the United Nations General Assembly (UNGA) as world leaders gathered for the summit in person after three years in New York.

UN secretary-general Antonio Guterres said the 77th meeting was taking place at a time when the world is in “great peril” and “paralyzed” due to the war, climate chaos, hate, poverty and inequality. World leaders denounced Russia’s invasion.

France’s Emmanuel Macron called Moscow’s war a return to “imperialism”, while rejecting the stance of nations with a neutral stance.

Turkey’s president Recep Tayyip Erdogan raked up the Kashmir issue at the ongoing 77th session of the UN General Assembly on Tuesday.

The Himalayan region of Kashmir is at the heart of a decades-old dispute between India and Pakistan, where both countries claim the region as theirs, but control only parts of it.

Mr Erdogan, a close ally of Pakistan said, he hopes for “permanent peace” in the region.

“India and Pakistan, after having established their sovereignty and independence 75 years ago, they still haven’t established peace and solidarity between one another,” he said.

“This is much unfortunate. We hope and pray that a fair and permanent peace and prosperity will be established in Kashmir.”

Liz Truss to meet Biden and Macron in New York

Liz Truss will meet Joe Biden and Emmanuel Macron in New York against the backdrop of Brexit tensions and questions over whether she regards the French leader a “friend or foe”.

On her first foreign trip as Prime Minister, Ms Truss flew overnight to the US for the annual UN General Assembly.

The visit will contain a series of meetings, including with the EU’s Ursula von der Leyen, and a speech to world leaders. It comes as political action resumes after the period of national mourning for the Queen.

Pakistan prime minister Shehbaz Sharif said he would apprise the world about his country’s “massive human tragedy” left in the wake of devastating floods.

“Reached New York a few hours ago to tell Pakistan’s story to the world, a story of deep anguish & pain arising out of a massive human tragedy caused by floods,” he tweeted yesterday.

“In my address at UNGA and bilateral meetings, I will present Pakistan’s case on issues that call for world’s immediate attention.”

Mr Sharif is expected to hold bilateral talks with several world leaders and attend the reception of the UN secretary-general Antonio Guterres.

Although there is no bilateral meeting scheduled with US president Joe Biden, Mr Sharif will reportedly interact with him informally during a reception.

According to reports, his visit was delayed until the very last minute due to issues with the logistics of obtaining US visas.

He is expected to hold nearly 20 meetings on the sidelines of the session. Mr Lavrov will address the gathering on Saturday.

The leaders of two Middle Eastern countries raised the Israel-Palestine conflict during their speeches at the General Assembly, urging the UN Security Council to “shoulder its responsibility”.

He said: “The Security Council must shoulder its responsibility and must compel Israel to end the occupation of Palestinian territories and to establish a Palestinian state along the borders of 1967 with East Jerusalem as its capital.”

King Abdullah II of Jordan stressed on Palestinians’ right to self-determination while asking the international community to show more support for Palestinian refugees.

“In the Palestinian-Israeli conflict, peace continues to be elusive,” said Mr Abdullah.

“It is the people themselves, not politics and politicians, who will have to come together and push their leaders to resolve this.”

The Jordanian King met Israeli prime minister Yair Lapid on the sidelines of the session to discuss the recent escalation between Israeli forces and Palestinians in the West Bank.

South Korean president warns of threat to freedom and peace

South Korean president Yoon Suk Yeol, in his address to the General Assembly, warned that freedom and peace in the global community were yet again in “jeopardy.”

Attempts to “alter the status quo by force, nuclear and other weapons of mass destruction and systemic violations of human rights” must be overcome, he said.

However, he made no mention of the threat on South Korea’s own doorstep — North Korea.

“When freedom of any citizen or nation in the global community is in peril,” he said, adding, “it is the community of nations that must stand together in solidarity to defend that freedom.”

Brazil’s far-right leader Jair Bolsonaro, who is seeking reelection next month, used his speech at the General Assembly to promote the merits of his administration.

His speech focused on the economy and the welfare program distributed to millions of Brazilians during the pandemic.

“In spite of the global crisis, Brazil reached the end of 2022 with an economy in full recovery,” Mr Bolsonaro said, stressing a falling unemployment rate and disinflation in Latin America’s largest nation.

He repeated his willingness to foster negotiations to resolve the conflict between Russia and Ukraine, while calling for a ceasefire.

No nation can stay ‘indifferent’ on Ukraine war, says Macron

French president Emanuel Macron urged countries not to stay neutral about condemning Russia’s war in Ukraine as he called Moscow’s invasion a new form of imperialism.

Speaking to the UN General Assembly gathering of world leaders, Mr Macron insisted that any negotiation to end the more than six-month-old war can succeed only “if Ukraine’s sovereignty is respected, its territory liberated and its security protected.”

“Who here can defend the idea that the invasion of Ukraine justifies no sanction?” he asked.

“Who of you here can consider that the day when something similar with a more powerful neighbour happens to you, there’ll be silence from the region, from the world?”

Speaking at the General Assembly’s annual high-level meeting, he said the international community is not “ready or willing” to tackle the challenges that threaten the future of humanity.

Mr Guterres warned world leaders that progress on such “big issues” is being “held hostage” by geopolitical tensions, leaving the world “paralysed.”

World leaders meeting at the United Nations in New York denounced Russia’s invasion of Ukraine, with Turkey offering to broker peace between the two countries.

German chancellor Olaf Scholz said Putin will only give up his “imperial ambitions” that risk destroying Ukraine and Russia if he recognises he cannot win the war.

“This is why we will not accept any peace dictated by Russia and this is why Ukraine must be able to fend off Russia’s attack,” Mr Scholz said in his first address to the General Assembly.

Japanese prime minister Fumio Kishida told the assembly the UN’s credibility was in danger because of the invasion by Russia, a permanent member of the Security Council, and reforms of the UNSC were needed.

“Russia’s invasion of Ukraine is a conduct that tramples the philosophy and principles of the UN charter … It should never be tolerated,” Mr Kishida said.

Turkey’s Recep Tayyip Erdogan, who has tried to mediate with the Kremlin since Russia’s invasion on 24 February, called on Moscow to return captured territory in Ukraine.

“We think the war will never have a triumph, and a fair peace process will not have a loser,” he said.

“We are always underlining the significance of diplomacy in the settlement of the dispute.”

The United Nations secretary-general has called on all developed nations to tax the windfall profits of fossil fuel companies.

Antonio Guterres said the taxed funds should be redirected to countries suffering loss and damage caused by the climate crisis and to people struggling with rising food and energy prices.

“The fossil fuel industry is feasting on hundreds of billions of dollars in subsidies and windfall profits while household budgets shrink and our planet burns,” he told the United Nations General Assembly in New York on Tuesday.

“Polluters must pay.”His remarks come after Britain’s new prime minister, Liz Truss, has made clear she is against a windfall tax.