The tabloids were buzzing with Halle Berry’s brazen PDA with Hubby Van Hunt, when she declares “we do what tha F***k we want”! 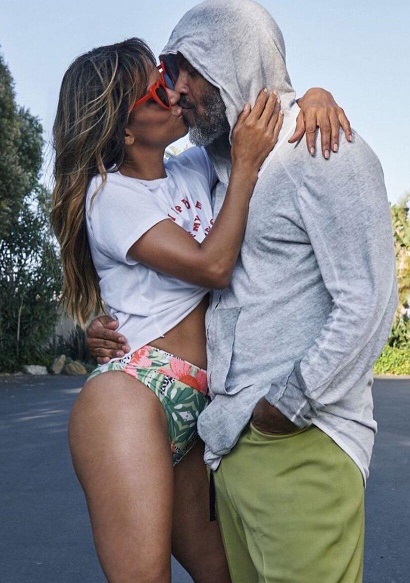 Halle Berry is having the time of her life, and she’s not afraid to show it — even if internet trolls have a few things to say.

The Oscar winner, 54, took to Instagram on Saturday to share an intimate photo of herself and boyfriend Van Hunt, 51, kissing outdoors in a loving embrace.

Sporting pink and green bikini bottoms, a white T-shirt and red heart-shaped sunglasses, the actress is pictured with her arms around Hunt, who is dressed casually in a gray hoodie and green pants.

“We do this thing called whatever the f*** we want!” wrote Berry, whose famed washboard abs and glutes are on full display in the photo.

Berry’s post and defiant message comes after a new interview with Essence in which she explained her love-hate relationship with social media, and the constant onslaught of rude comments she receives from trolls.

“The thing I hate, and this will never stop, I know, because it’s the nature of the world, but I really hate the negativity that gets on there. I just really want to like, slap these trolls because it really is damaging to people,” Berry admitted. “It’s damaging to young people and I really wish that if you really didn’t have something [nice] to say, don’t say it. If you’ve got something so negative to say about somebody, why are you on their page?”

The mom of two children, Maceo, 7, and Nahla, 13, said that while she can handle the comments, she recognizes how damaging they can be to young people.

“I see that with my daughter and it infuriates me,” she said. ‘That’s one of the reasons I’ve kept them out of the media, to protect them, for this very reason.”

Still, it’s impossible to shelter her kids entirely from the outside world, especially her teen daughter, whose father is actor and model Gabriel Aubry. That’s why Berry tries to make it clear to Nahla to take any negative feedback with a grain of salt.

“It’s not something she should take to heart. While that’s easier said than done, I think as a mother, all I can do is reiterate that message and hope that in the quiet of her mind, she’s listening,” said Berry.

But when it comes to her own accounts, Berry loves how “fun” social media is, saying she tries “to lean into and not to take myself seriously.” But it also gives her an opportunity to control her own narrative, particularly after lacking that autonomy after decades in the spotlight.

“The story that was perpetuated about me just wasn’t true but it was editorialized by people and it was out of my control,” said Berry. “Now I get to control and show different sides of myself. I really love that.”

Clearly, Berry is having fun telling her own story. After making their relationship Instagram official last summer, she and Hunt took the red carpet by storm at the Academy Awards for their “1st date nite.”

Halle Berry and Van Hunt made their red carpet debut at Sunday’s Academy Awards — and they’ve giving fans a behind-the-scenes look at their “1st date nite.”

Halle Berry is putting her love for her boyfriend Van Hunt on full display.

On Saturday, the Oscar winner, 54, shared a sweet kiss with Hunt, 51, in a romantic snapshot that Berry posted to her Instagram account.

In the photo, Berry was dressed in a white shirt with green and pink bikini bottoms while wearing red sunglasses as she planted a smooch on Hunt, who wore a gray sweatshirt and green pants for the photo.

“We do this thing called whatever the f*ck we want! 💋,” the X-Men actress wrote in the caption of her post.

Meanwhile, Berry responded to fans in the comments section, raving about love. “Love wins,” one fan wrote to which the actress said: “I truly believe that. I’ll never stop fighting for ❤️.”

Another fan told Berry, “You give me hope. We are the same age.. twice divorced.. I’m disenchanted with dating and then I see you two.” Berry encouraged the fan, writing, “Never give up on love… Keep your heart open it will find you!”

Want to get the biggest stories from PEOPLE every weekday? Subscribe to our new podcast, PEOPLE Every Day, to get the essential celebrity, entertainment and human interest news stories Monday through Friday.

Berry and Hunt went public with their relationship last September, around the time a source told PEOPLE that the couple had been seeing each other for “several months” and Hunt had already met Berry’s son Maceo, 7, and daughter Nahla, 13.

Another source told PEOPLE at the time that Berry and Hunt are “very successful and smart, and they seem to be in a mature relationship.”

Hunt previously told Entertainment Tonight that he was “a completely different person” since meeting Berry. “I can say it like that, and I think that it’s improved every aspect of my life,” the musician said of their relationship.

In February, Berry raved about her boyfriend on Valentine’s Day in an Instagram post where she told her followers to “NEVER SETTLE for less than what makes your heart sing!”

“No matter what they say or what they call you. No matter how many times you try, it’s always worth it,” the mom of two continued. “If you desire love, you will find your match, your equal ….your person…even if it takes you until you’re 54!”Our goal is to create a safe and engaging place for users to connect over interests and passions. In order to improve our community experience, we are temporarily suspending article commenting.

Halle Berry Just Wore an Unzipped Sweatshirt With Nothing Underneath

“Cooking up something fun…”

Halle Berry is blessing our feeds yet again with another pants-free post. And this time, she’s bringing her boyfriend Van Hunt into the fold.

On Saturday, the actress shared a photo of the couple packing on the PDA, and in the snapshot, Berry — who has her arms wrapped around Hunt while kissing him — wore a pair of bikini bottoms and not much else. She complemented the pantless look with a white T-shirt that’s tied just above her stomach and red heart-shaped sunglasses.

“We do this thing called whatever the f*** we want!” she captioned the loved-up photo on Instagram — a message that’s seemingly aimed directly at her haters.

Earlier this week, Berry spoke to Essence about the downside of sharing her private life on social media, and revealed that the rude comments she receives from trolls can affect her state of mind.

“The thing I hate, and this will never stop, I know because it’s the nature of the world, but I really hate the negativity that gets on there. I just really want to like, slap these trolls because it really is damaging to people,” she told the magazine. “It’s damaging to young people and I really wish that if you really didn’t have something [nice] to say, don’t say it. If you’ve got something so negative to say about somebody, why are you on their page?”

Berry did admit, however, that one positive aspect of having her own platform is the ability to show fans her authentic self. “I can say what I want to say about what I want to talk about. It can be in my voice and my words,” she continued. “For a long time I felt that the story that was perpetuated about me just wasn’t true but it was editorialized by people and it was out of my control. Now I get to control and show different sides of myself. I really love that.”