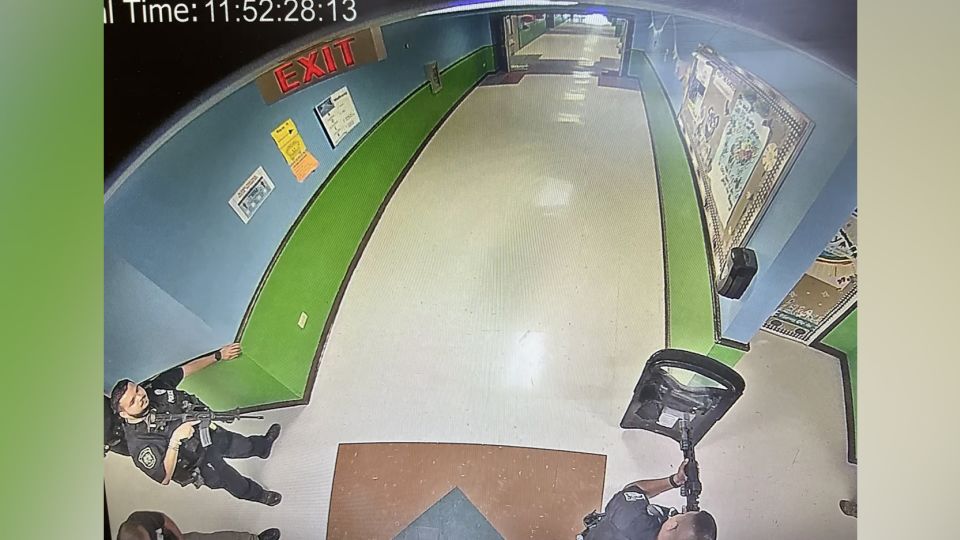 The Texas House committee investigating the Uvalde school shooting is planning to release hallway surveillance video of what police were doing, along with a fact-focused report to the families of those who were massacred, according to a source close to the committee.

The date of the release of the report and the video has not been announced.

Rep. Dustin Burrows, the committee chairman, has pushed for the release of the surveillance video and said Monday that releasing the footage would be important because the public would see the evidence for themselves.

Burrows is prohibited from releasing the hallway video because he signed a non-disclosure agreement with the Texas Department of Public Safety, he said on Twitter on Friday.

He attached two letters to his tweet. In one, he asked the DPS for permission to release the video to the public. The other is a response from the DPS saying that the agency agrees that the video will bring “clarity to the public regarding the tragic events in Uvalde,” but adds the Uvalde district attorney “has objected to releasing the video.”

His tweet states that the video he is pushing to release “contains no imagery of victims or footage of violence.”

CNN has requested comment from Uvalde District Attorney Christina Mitchell Busbee on Friday and on Sunday about why she objects to the release of the video, but has not heard back.

The video would offer primary evidence of what responding police were doing when a gunman opened fire inside adjoining elementary school classrooms on May 24, fatally shooting 19 young students and two teachers. A group of officers waited in a nearby hallway for over an hour before they breached the door and killed the gunman.

What officers were doing in those 77 minutes remains largely unclear, and some officials have questioned the trustworthiness of the various investigations working to understand what went wrong that day.

What The Video Shows

Some images from the video were obtained by the Texas Tribune and Austin American-Statesman and showed that officers had tactical gear and significant firepower – including rifles and a tactical shield – well before they ultimately breached the door.

The video is “wrenching,” Tony Plohetski, a reporter for the Austin American-Statesman who has watched the surveillance footage told CNN.

The video begins shortly after the gunman entered the school at 11:33 a.m. In the video, the 18-year-old gunman enters a classroom and “you hear a hail of gunfire,” Plohetski said. Minutes later, a group of law enforcement officers arrive at the room and there is another exchange of gunfire.

“You see the police officers actually getting blown back. One of them actually touches his head,” and suspects an injury, he said.

Over the next hour of the video, officers converge on the scene and gear up with helmets, assault rifles, ballistic shields, and tear gas canisters. But they do not take action.

“Essentially they stand there for an hour as these minutes tick by,” he said. “It’s not until 12:50 that we then see those police officers move to that classroom, breach the door, and take down the gunman.”

The reporter said the video intensifies questions about the response from local, state and federal agencies on scene.

“As to why it was handled the way it did and why the police did not move with a greater sense of urgency, I don’t think we’ve gotten to the truth of that yet,” he said.

“This video, once it is finally made public, is going to be very disturbing to many people and, I think, really deepen the tragedy that happened that day,” he said.

On Thursday, Uvalde Mayor Don McLaughlin refuted a new assessment of the law enforcement response to the shooting, saying the report by the rapid response training center – an active shooter and attack response training provider at Texas State University – “does not give a complete and accurate account of what happened.”

McLaughlin took issue with the first part of the report, which said a Uvalde police officer with a rifle spotted the gunman outside the school, but a supervisor either did not hear the officer or responded too late when the officer asked for permission to fire.

“No Uvalde police department officer saw the shooter on May 24 prior to him entering the school,” McLaughlin said in a statement. “No Uvalde police officers had any opportunity to take a shot at the gunman.”

The preliminary report will clarify conflicting accounts of what happened on May 24. The report will include verbatim quotes from sworn testimony, a source told CNN.

John Curnutt, assistant director of the Advanced Law Enforcement Rapid Response Training Center, said in a statement to CNN on Monday that the findings were based on two statements from one of the officers.

“At the time we released our initial after-action, the information we had on this particular officer came from the officer’s two previous statements given to investigators. We were not aware that just prior to us releasing our initial after-action, the officer gave a third statement to investigators that was different from the first two statements,” Curnutt said.

The purpose of the investigative committee is a fact-finding one. Two other House committees, Youth Health & Safety and Homeland Security & Public Safety, will be tasked with making legislative recommendations.

Separately, Uvalde County Commissioners on Monday unanimously passed a resolution calling on Texas Gov. Greg Abbott to call a special session of the Texas Legislature to consider raising the minimum age of purchase for semi-automatic, assault-style rifles from 18 to 21.

“Texans want to feel reassured that we can go to the grocery store, church, school, to the mall, and public events safely,” County Commissioner Roland Garza, who introduced the resolution, told CNN. “This might be a small step but something must be done. We want Governor Abbott to listen to us.”