Supreme Court Pick Ketanji Brown Jackson Rejects GOP Attack On Her Record: ‘Nothing Could Be Further From The Truth’ 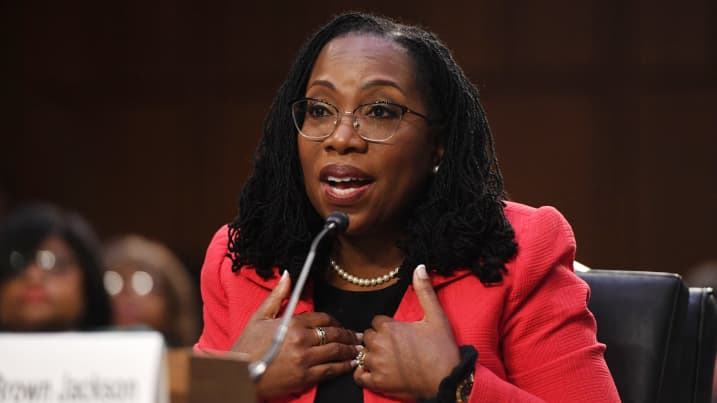 Supreme Court nominee Ketanji Brown Jackson in a Senate confirmation hearing Tuesday forcefully defended her judicial record against Republican accusations that she was too lenient in sentencing child pornography offenders.

“As a mother and a judge who has had to deal with these cases, I was thinking that nothing could be further from the truth,” Jackson said when asked about the attacks from some GOP lawmakers.

Senate Judiciary Committee Chairman Dick Durbin, D-Ill., who asked the question at the start of the second day of Jackson’s confirmation hearings, directly referenced claims made by Sen. Josh Hawley, R-Mo., another member of the judiciary panel.

But fact checks from numerous media outlets called that claim misleading. Durbin and other Democrats have quoted a conservative columnist who called Hawley’s argument “meritless to the point of demagoguery.”

Jackson’s defense of her record came at the start of two days of cross-examination by senators as part of her confirmation hearings. The 51-year-old Jackson, who, if confirmed, will become the first Black woman to sit on the Supreme Court, portrayed herself as an independent jurist as Democrats lauded her qualifications and Republicans showed skepticism.

Lawmakers questioned Jackson under oath in a public forum Tuesday for the first time since President Joe Biden nominated her to the Supreme Court. Jackson, a judge on the U.S. Court of Appeals for the District of Columbia Circuit, previously met privately with senators on Capitol Hill.

The first Supreme Court nominee by Biden, Jackson would succeed the retiring Justice Stephen Breyer, replacing one liberal justice with another. The high court’s conservatives currently enjoy a 6-3 majority over the liberals.

Jackson in her first appearance before the Senate committee on Monday offered a summary defense of her career from the bench. She said she looks at her cases “from a neutral posture” and applies the law “without fear or favor.”

She elaborated Tuesday morning, telling the senators that her judicial experience has shown her to be “impartial.”

“I don’t think anyone could look at my record and say that it is pointing in one direction or another, that it is supporting one viewpoint or another,” she told Sen. Chuck Grassley, R-Iowa, the panel’s ranking member.

Jackson also declined requests from Durbin and Grassley to share her views on court packing, the prospect of increasing the number of seats on the Supreme Court. She referred to Justice Amy Coney Barrett, the third nominee of former President Donald Trump, who had also refused to opine on that issue during her confirmation hearings.

“My North Star is the consideration of the proper role of a judge in our constitutional scheme,” Jackson said. “In my view judges should not be speaking to political issues.”

The mood at the hearing was calm and cordial at first. Grassley prompted laughter from the room when he told the judge that his wife said she had enjoyed Jackson’s remarks on Monday, but had not said the same about his own speech.

But the tone shifted during questions from Sen. Lindsey Graham, R-S.C., according to reporters in the room.

Graham began his time by asking Jackson about her faith. “On a scale of 1 to 10, how faithful would you say you are, in terms of religion?” Graham asked, reportedly leading some in the room to quickly turn their heads in shock.

Graham also pressed Jackson about a brief she wrote as a public defender on behalf of detainees at Guantanamo Bay, Cuba. The senator clashed with Durbin, who took issue with Graham’s support for keeping the offshore detention center in open.