Stakes raised in midterm elections with Roe v. Wade poised to be overturned 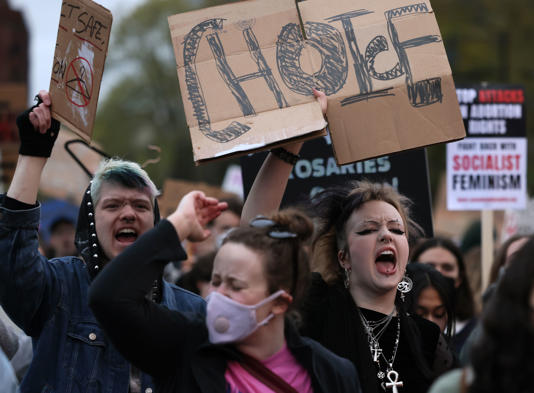 A leaked draft opinion suggests the US Supreme Court could be poised to overturn the landmark 1973 Roe v. Wade case that legalized abortion nationwide, according to a Politico report released Monday.

A decision to overrule Roe would lead to abortion bans in roughly half the states and could have huge ramifications for this year’s elections. But it’s unclear if the draft represents the court’s final word on the matter — opinions often change in ways big and small in the drafting process.

In the wake of the report Monday night that the US Supreme Court appears on the verge of overturning the landmark Roe v. Wade abortion ruling next month, Democrats on the national level have a clear path forward – and it’s one they won’t take.

Repealing Roe, after all, doesn’t impose a national law as it relates to abortion rights. It kicks the question back to every state to make up their own laws, or even to Congress to craft a federal law.

Overturning Roe could open the door to a federal abortion ban.

The strongly worded legal language used in a draft Supreme Court opinion that appears to overturn 50-year-old abortion-right protections could provoke conservative efforts to enact a universal, nationwide abortion ban, according to legal and policy analysts on both sides of the political debate. They say the case has already galvanized advocates who want a federal law criminalizing abortion.

The Supreme Court, based on the draft opinion, appears set to not only uphold a controversial Mississippi law banning abortions after 15 weeks of pregnancy but also overturn the landmark 1973 Roe v. Wade decision that protected a woman’s right to abortion. The court opinion suggests the question over abortion restrictions should be legislated at the state level.

As Senator Elizabeth Warren made her way to a car outside of the Supreme Court, her outrage was palpable.

“I am angry. Angry and upset and determined. The United States Congress can keep Roe v. Wade the law of the land. They just need to do it,” Warren said as she was surrounded by reporters. The scene was captured on video, and quickly ricocheted across social media Tuesday.

The Massachusetts Democrat was reacting to the leak of a draft opinion penned by Justice Samuel Alito, first reported by Politico, that demonstrates the nation’s highest court is poised to overturn the pivotal 1973 ruling.

As women in the United States find themselves on the verge of possibly losing the constitutional right to abortion, courts in many other parts of the world have been moving in the opposite direction.

That includes in a number of traditionally conservative societies — such as recently in Colombia, where the Constitutional Court in February legalized the procedure until the 24th week of pregnancy, part of a broader trend seen in parts of heavily Catholic Latin America.

It’s not yet clear what impact there will be outside the United States from the leaked draft opinion suggesting the US Supreme Court could overturn the landmark 1973 Roe v. Wade decision.

In an already divided country, political battle lines hardened Tuesday with the prospect that the Supreme Court is poised to overturn Roe v. Wade – a move that threatens to upend the 2022 midterm elections and turn the campaign into a massive mobilizing effort over the issues of abortion, individual rights and the contrasting philosophies of the two major political parties.

Supporters of abortion rights and their Democratic allies predicted that the thunderclap heard Monday night with Politico’s publication of a leaked draft opinion by Justice Samuel Alito would reverberate through to the fall campaign and possibly beyond.