Rihanna named a national hero of Barbados: ‘May you continue to shine like a diamond’ 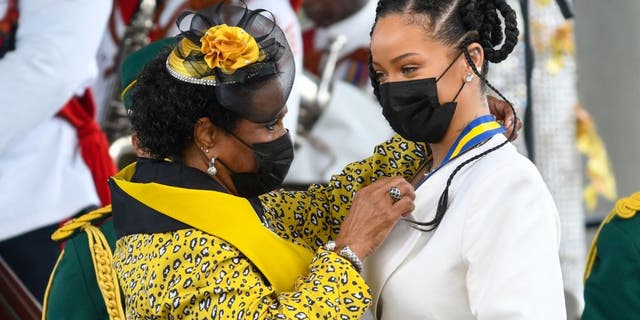 The singer and entrepreneur was named Barbados’ 11th national hero by the nation’s Prime Minister Mia Mottley as the country celebrated becoming a republic for the first time in history.

“Ambassador Robyn Rihanna Fenty has given service to Barbados which has been exemplified by visionary and pioneering leadership,” Prime Minister Mottley said during the Monday night ceremony.

“May you continue to shine like a diamond and bring honor to your nation,” Prime Minister Mottley added using lyrics from the singer’s 2012 single “Diamonds.”

On Tuesday, the singer was honored in a separate ceremony where she received a large medal emblazoned with the outline of Barbados and blew a kiss to the cheering crowd.

“This is a day that I will never, ever forget. It’s also a day that I never saw coming,” she said in a brief speech in which she encouraged the youth to continue pushing Barbados forward. “I have traveled the world and received several awards and recognitions, but nothing, nothing compares to being recognized in the soil that you grew in.”

More: Rihanna is busy ‘trying to save the world,’ so stop asking when the new album’s coming out

Several leaders and dignitaries attended Monday’s ceremony, including Prince Charles, who Rihanna greeted after she was called on the stage with Mottley.

When Mottley presented Rihanna, she noted that the pop star came from humble origins and was born less than a mile from where the ceremony was taking place.

Queen Elizabeth II, who is no longer head of state in Barbados, sent her congratulations to the country in a letter Tuesday.

“On this significant occasion and your assumption of office as the first President of Barbados, I extend my congratulations to you and all Barbadians,” she wrote. “I first visited your beautiful country on the eve of independence in early 1966, and I am very pleased that my son is with you today. Since then, the people of Barbados have held a special place in my heart.”

Barbados has been independent from the United Kingdom since 1966 but moved its government system to a republic, swearing in the country’s first president Sandra Mason Tuesday to celebrate the 55th Independence Day.

The drive to become a republic began more than two decades ago and culminated with the island’s Parliament electing the first-ever president last month in a two-thirds majority vote.

“It is the beginning of a new era,” he wrote. “Any Barbadian can aspire now to be our Head of State.”

It is the first time in more than 20 years that Barbados has bestowed a national hero honor: The last person to receive the title was former cricket player Garfield St. Aubrun Sobers.

Billionaire is another title the singer picked up this year after Forbes announced Rihanna as one of the richest female entertainers in the world. The publication estimates her net worth at $1.7 billion, with most of it coming from her cosmetic brand Fenty Beauty.