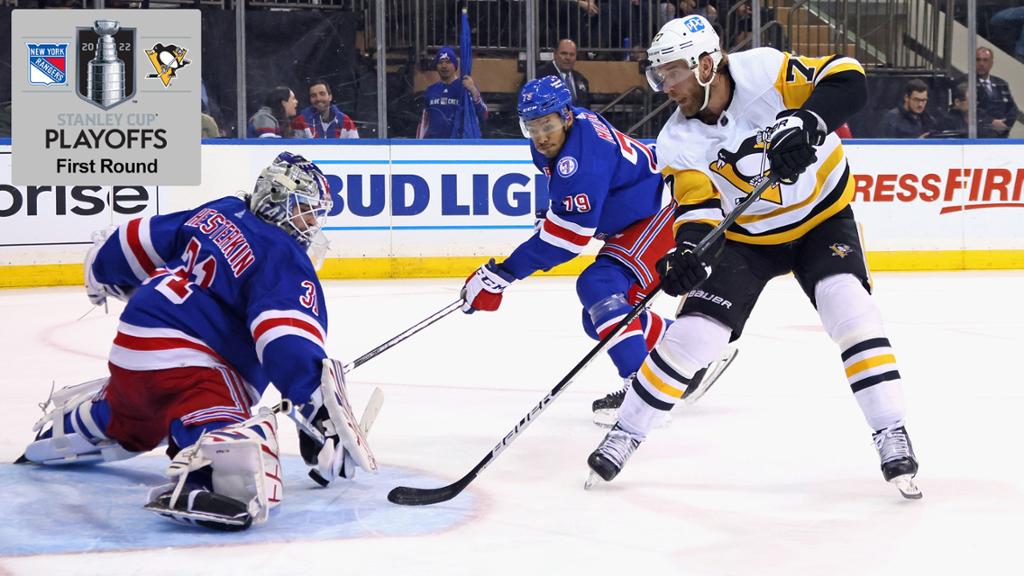 The New York Rangers are off to the second round of the 2022 Stanley Cup Playoffs after a thrilling, 4-3 overtime win over the Pittsburgh Penguins in their first round matchup. The Rangers battled back in this game — after trailing 3-2 late into the third period — and also this series, after going down 3-1 after Game 4.

K’Andre Miller drew a holding penalty three minutes into overtime and at 5:46 of the extra period, Artemi Panarin scored the game-winning goal to send the Rangers to the second round and set off a massive celebration on the ice.

“He’s the guy, when we went into overtime, I said to myself ‘I know who’s going to score if we score,'” Rangers coach Gerard Gallant said about Panarin after the game. “If we we get the winning goal its going to be him.”

On the comeback, Gallant said his team was even keeled through the third period, even as they trailed heading into the game’s final minutes.

“It wasn’t a big deal for us … we’ve been a real good third period team. Its a one goal game … you keep battling right to the end,” Gallant said. “We didn’t create a whole bunch of stuff the first 14 minutes but after that we started to push a little bit … and obviously at the end with that power play goal but we just kept working and battling.”

It was the 46th Stanley Cup playoff Game 7 to go to overtime, and the first since the Stars beat the Avalanche in the second round in 2020. The Stars went on to the Stanley Cup Final, where they fell to the Tampa Bay Lightning.

The drama began before the puck dropped in New York on Sunday. Penguins captain Sidney Crosby and goalie Tristan Jarry were both game-time decisions and both had an impact on the game. Crosby tallied an assist on Jake Guentzel’s second period goal and Jarry had 26 saves, but couldn’t make the final stop on Panarin.

The Penguins took the lead on the Guentzel goal, and after Miller tied the game at 2-2, Evan Rodrigues scored his third goal of the series with a shorthanded tally that sent the Pens into the third period with a 3-2 lead. Mika Zibanejad got the equalizer that eventually sent the game into overtime with under six minutes left in regulation.

The Rangers now move on to the second round, where they’ll take on the Carolina Hurricanes.

Everything to know about the 2022 Stanley Cup Playoffs

The Stanley Cup Playoffs are one of the most exciting postseason formats in sports. For the first time in three years, every team played a full 82-game regular season schedule without an interruptions from the COVID-19 pandemic. The divisions were completely back to normal with teams being permitted to cross the border and play in Canada and vice versa.

The Florida Panthers captured the President’s Trophy as the team with the most points around the league. Equipped with one of the deepest rosters in the NHL, the Panthers finished with a 58-18-6 record and a grand total of 122 points when the regular season dust settled.

The structure of the playoffs is as follows:

All times Eastern
(* if necessary)

The Islanders fired Barry Trotz earlier in May

The New York Islanders have named Lane Lambert as the team’s next head coach. Lambert will replace Barry Trotz, who was fired by the organization on May 9.

Lambert had served as the Islanders associate coach for the past four seasons.

“I had the opportunity to work with Lane over the past four years, which includes spending time with him on a one-on-one basis when he served as the interim Head Coach this past season,” Islanders President and General Manager Lou Lamoriello said in a press release. “In my opinion, he is the right person to coach this team.”

In addition, he was the head coach of the Predators’ American Hockey League affiliate Milwaukee Admirals from 2007-11. The Admirals won two West Division titles (2008-09 and 2010-11) during Lambert’s time behind the bench.

Lambert also played in the NHL prior to his coaching career.

He was a second round pick of the Detroit Red Wings in the 1983 NHL Draft. During his career, Lambert recorded 124 points (58 goals and 66 assists) in 283 career games with the Red Wings, New York Rangers and Quebec Nordiques. His best campaign came during the 1987-88 season with the Nordiques when he accumulated 41 points (13 goals and 28 assists).