OnlyFans Star, 25, Is Arrested For ‘Stabbing Boyfriend, 27, To Death During A Domestic Dispute’ In Their Luxury Miami High-Rise 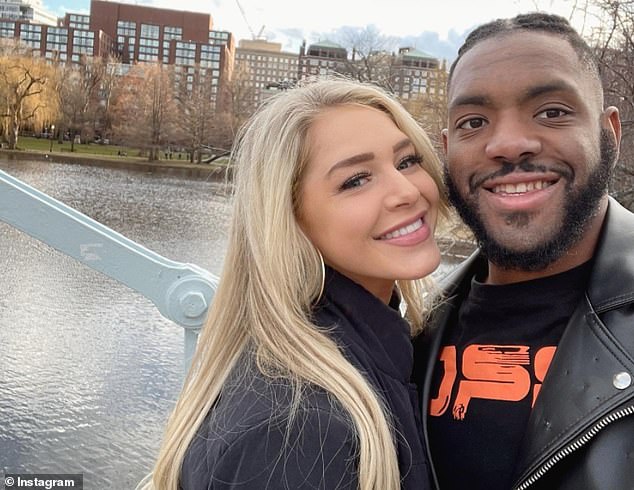 A Florida OnlyFans model has been arrested for her boyfriend’s murder after she stabbed him in an apparent domestic dispute.

Courtney Clenney, 25, known on the subscription service as Courtney Tailor, stabbed her boyfriend, Christian Obumseli, in the shoulder amid a struggle at their Miami condominium on Sunday, police said.

Obumseli, 27, was rushed to a nearby hospital, where he died from his injuries.

The influencer, who has not been formally charged in her boyfriend’s death, was hospitalized over mental health concerns after making suicidal threats while in police custody, police said.

Investigators are working to determine if Clenney, whose neighbor alleges was abused by Obumseli, acted in self-defense.

A neighbor claiming to have a direct view of the couple’s apartment said he witnessed Obumseli strike Clenney about a week before the fatal stabbing.

‘I could not tell if it was open-handed or closed-handed, but he was swinging at her,’ the unnamed resident told WPLG.

However, a trio who identified themselves as close friends of the couple alleged the social media model was the violent one in the ‘rocky relationship’.

‘We’ve seen her hit him. I’ve never seen him hit her,’ Ashley Vaughn said. ‘From what we’ve personally experienced between the both of them, we believe that Christian wouldn’t put her in a position where she would need to stab him to protect herself.’

‘We didn’t think this is how far it would have gone,’ Tahki Banks said. ‘Even that we really lost Christian only, it feels like we lost Courtney at the same time.’

Clenney, who has more than two million Instagram followers, was hospitalized Sunday under Florida’s Baker Act.

The law allows law enforcement, judges, doctors and mental health experts to commit a person to a treatment center for 72 hours if certain violent or suicidal tendencies are displayed.

It is unclear if or when she will be released from the hospital. However, new content was added to her OnlyFans page the day after she was detained.

While specific details surrounding their relationship remain in question, it does appear the couple has been together for several years.

Their friends said Clenney and Obumseli moved to Miami from Texas a few years back. The group, which reportedly dined, traveled and regularly socialized with the pair, said they are completely distraught over the situation.

‘He was just really high-energy, bright, intelligent, would bring a smile to anyone,’ Josh Ramsey told WTVJ. ‘These are our two friends we’ve gone on vacation with, we go to dinners with, we go out on the town with them, and it seems like it’s straight out of a crime documentary,’ Ramsey told WTVJ.

‘We would have never guessed it would have escalated to this point. I think I speak for our whole friend group, we are just shocked. Very distraught about this,’ he added.

A GoFundMe account established in support of Obumseli’s family has raised more than $65,000.

The account creator said Obumseli was killed a week before his 28th birthday, leaving ‘many unanswered questions and creates a void that can never be fixed or filled.’

‘That someone’s selfish act ripped Christian away from this world. It is not enough to say we are shocked and hurting – We are utterly devastated,’ his loved ones wrote.

‘Christian was extremely compassionate with a desire always to uplift those around him. He did not deserve for his life to be cut short by a heinous act of violence. We will never forget his infectious smile that could light up any room or his caring spirit.’

New video showing the bloody aftermath of a domestic disturbance in Miami, which ended with one man being stabbed to death and a woman covered in blood.

In the footage, you see the woman in sweatpants and a bra handcuffed and soaked in blood as she sits on the floor of a luxury apartment talking to cops.