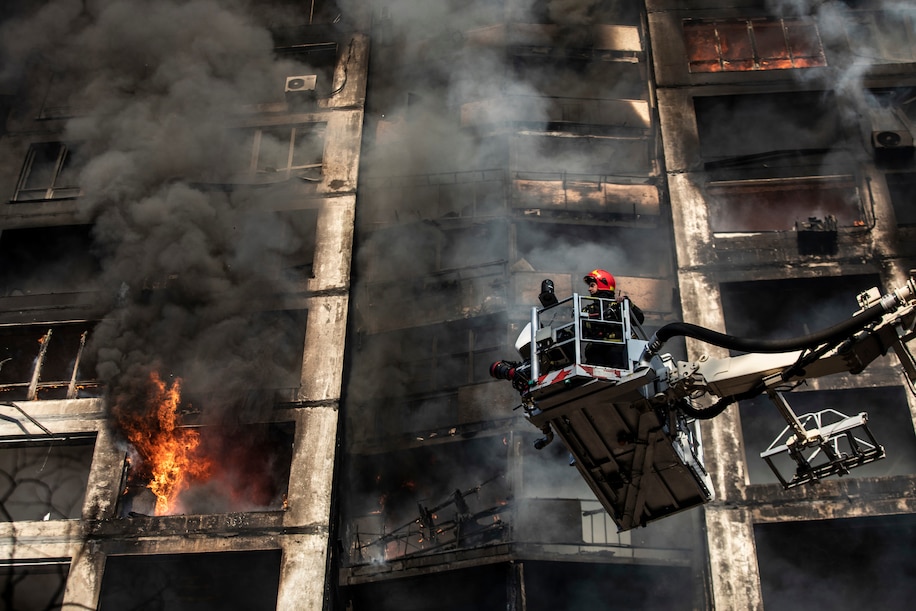 A suspected Russian missile attack on an apartment building in the Ukrainian capital early Tuesday killed at least four people and sparked a frenzied effort to rescue residents, prompting Kyiv Mayor Vitali Klitschko to announce a curfew in what he called a “difficult and dangerous moment.”

The strike, on a tall building in the Sviatoshynskyi district shortly before 4 a.m., was one of at least three suspected Russian attacks on residential neighborhoods in Kyiv in the past two days.

Fires burned for a few hours after the suspected strike, as dozens of firefighters battled the flames and used cranes to try to extract residents trapped inside. Locals said there were about 128 apartments in the building and that about half the occupants had fled before Tuesday’s attack.

Firefighters carry the dead body of an elderly man out of an apartment building after a bombing in Kyiv, Ukraine, on March 15. (Heidi Levine for The Washington Post)

Residents described the area of Sviatoshynskyi as a tightknit community, with a garden, stores and cafes.

The latest attack on the capital comes as the heads of three governments in the European Union — the Czech Republic, Poland and Slovenia — are set to travel to Kyiv to meet with Ukrainian President Volodymyr Zelensky.

Photos showed elderly residents being evacuated from the damaged building along with pets in carriers.

Ukrainian lawmaker Oleksiy Goncharenko tweeted a video from the scene Tuesday and called on Western countries to further support Ukraine. “Please help us,” he said.

Residents react as firefighters work to extinguish a high rise apartment building burning in Kyiv on March 15. (Heidi Levine for The Washington Post)

In another video shared to his Twitter account shortly afterward, Goncharenko also said the building had 128 apartments and at least two schools. “This is the fire of the third world war,” he said of the flames being extinguished behind him.

Goncharenko told viewers that the area was solely residential and that there were no military targets nearby that Russia could have been targeting. Russian President Vladimir Putin, he said, is the “Hitler” of the 21st century.

People retrieve belongings from a residential apartment block after it was shelled in the northwestern Obolon district of Kyiv on March 14. (Heidi Levine for The Washington Post/FTWP)

City officials later described the Podilskyi attack as a missile or rocket strike that hit near a checkpoint close to residential buildings. It killed at least one person and wounded several others. The Obolon attack, which also killed one person, according to Red Cross volunteers, came from Russian artillery.