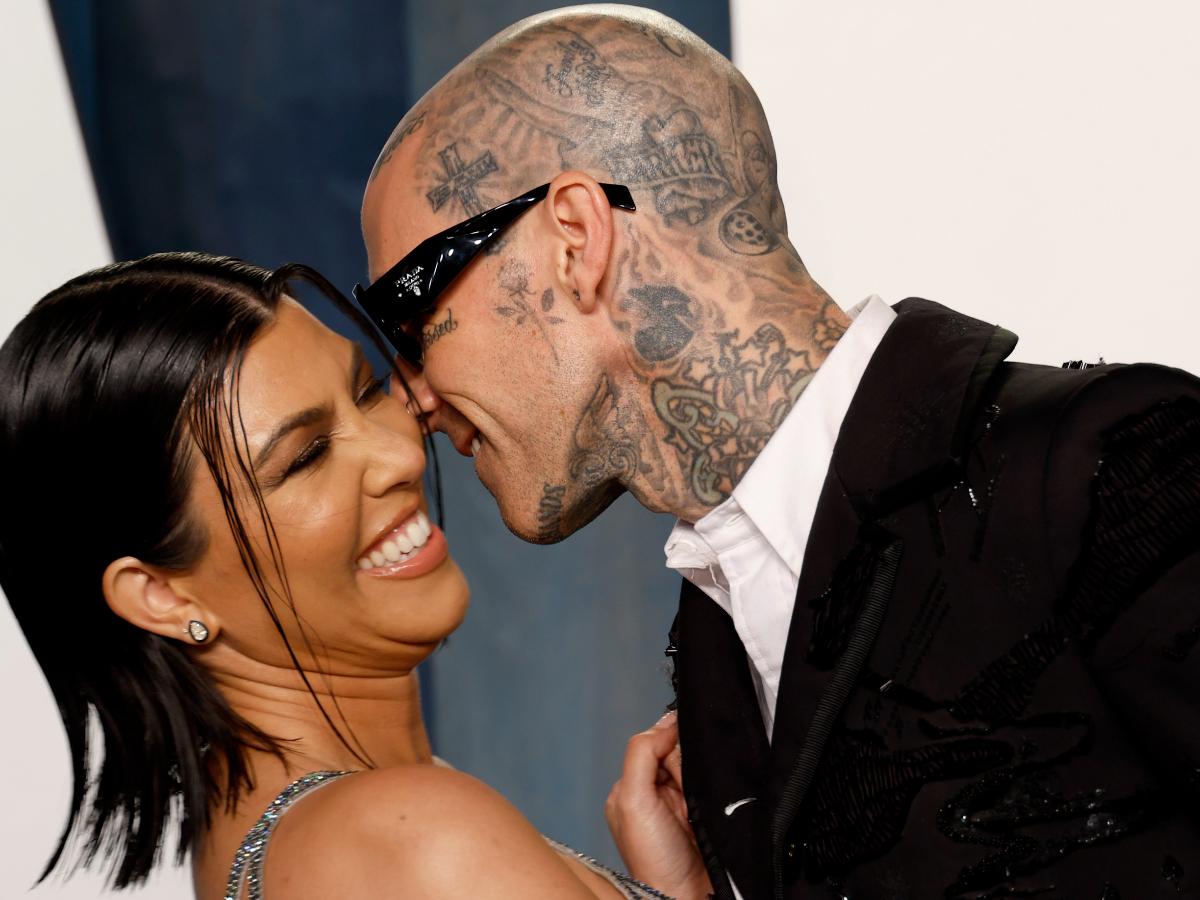 Kourtney Kardashian and Travis Barker are officially married after tying the knot in Las Vegas on April 4, hours after attending the 2022 Grammys. All the details about the surprise ceremony below.

The Keeping Up With the Kardashians alum, 42, tied the knot with the Blink-182 rocker, 46, in a surprise ceremony in Las Vegas early April 4, the One Love Wedding Chapel owner Marty Frierson confirms to E! News. The nuptials took place just hours after the couple attended the 2022 Grammys, held at Sin City’s MGM Grand Garden Arena, on April 3. According to TMZ, who was first to report the news, the stars walked into the wedding chapel with a marriage license already in hand.

Shortly before saying “I do,” they attended a Grammys after-party at Delilah LV, where the duo packed on the PDA. “They were seated at a table in the back and making out,” a source told E! News. “They weren’t holding back and were having a lot of fun.”

“Travis and Kourtney kept grabbing each other’s faces and looked madly in love,” the insider added. “They were showing major PDA and were really cute.”

Prior to their nuptials, the pair, who also attended the 2022 Oscars, had already started celebrating their blended family, which includes Kourtney’s children Mason, 12, Penelope, 9, and Reign, 7, and Travis’ kids Landon, 18, Alabama, 16, as well as his stepdaughter, Atiana De La Hoya, 22. (She co-parents her trio with ex Scott Disick while Travis shares his kids with Shanna Moakler.)

After initially sparking dating rumors back in December 2020, the couple confirmed their romance on Instagram in February 2021. They got engaged just eight months later, when Travis popped the question in a dreamy, beachside proposal at the Rosewood Miramar hotel in Montecito, Calif.

Naturally, Khloe Kardashian, Tristan Thompson, Kim Kardashian, Kris Jenner and Corey Gamble were on hand when Travis got down on one knee.

“Travis escorted Kourtney down to the beach, where he had red and white florals set up in the shape of a heart,” an eyewitness told E! News at the time. “It looked very romantic. Kourtney was smiling from ear to ear and put her hand over her mouth looking surprised. The family cheered for them and went back into the hotel.”

Another source added that Kourtney’s family “surprised” the couple inside the hotel. The source also stated that Kourtney “had no idea” Travis was planning to propose to her and that she “teared up and couldn’t stop saying, ‘I love you.'”

Later confirming the news on Instagram, Kourtney posted two photos of her and Travis in each other’s armssurrounded by candles and hundreds of roses as the sun set behind them. “Forever,” she captioned the pictures. Travis’ daughter Alabama was among the first to congratulate the pair, writing: “love u guys.”

Travis and Kourtney have always had a strong connection. In fact, the two were close friends and neighbors long before they ever began dating and became “obsessed” with one another, as she describe it.

Although they might’ve started off as just friends, an insider revealed that Travis has always had feelings for Kourtney.

“He’s always wanted to date her, but she would brush it off, and they continued to just have a friendship,” the source told E! News in March of last year. “Their relationship is going strong, and Travis has been treating her like a queen. He wants to do everything with her and is so excited about the relationship. It’s going really well and Travis’ kids love Kourtney.”

And as just about anyone keeping up knows, the couple has never shied away from sharing their love for one another with the world through numerous PDA-filled posts online. That includes for Travis’ 46th birthday on Nov. 14, where Kourtney posted a set of images of the two lovebirds holding hands, kissing and laughing together.

“I f–king love you more than anything,” she captioned the post. “My favorite everything. Happy birthday to you my baby.”

Travis echoed her sentiments, commenting, “You’re a dream come true, my soul mate my everything I LOVE YOU.”

What’s next for the couple? Well, Travis has already been teasing some potential baby names. When Kourtney posted a collection of photos on Instagram dressed up as Patricia Arquette’s character, Alabama Whitman, from the film True Romance for Halloween, Travis replied with a comment that quickly got the Internet’s attention. “Our sons name would be Elvis,” he shared, making a reference to the name of Alabama and Clarence’s son in the film.

But that reference might not be too far off from reality. In November, a separate source told E! News that the couple are “hoping to be expecting by next year.”

“They would love nothing more than to have a baby together. Kourtney has always wanted another baby and never felt like she was done,” another source added. “Now that she’s with Travis, she wants it even more.”

Plus, in the trailer for Hulu’s upcoming The Kardashians, her ex Scott reveals the duo “want to have a baby” together.