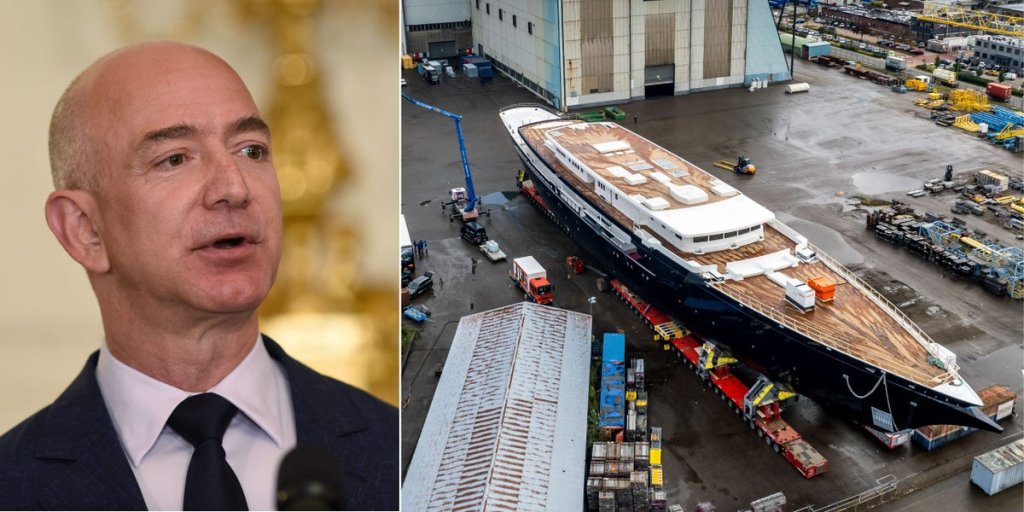 The 417-foot vessel was spotted Sunday floating at the Greenport shipyard in Rotterdam, Netherlands, with its three large masts in place. Dutch Yachting, a YouTube channel dedicated to Dutch-built vessels, posted video footage that gives us the closest look yet at Bezos’ yacht.

You can watch the video below:

The massive yacht has been the subject of months of contention in the Netherlands.

In order to get the vessel from the shipyard to the open water, it needed to pass through Rotterdam and underneath the city’s famous Koningshaven Bridge, known locally as De Hef. There was only one problem: Unlike many of his contemporaries’ yachts, Bezos’ ship is sail-assisted, which means it has three large masts, masts that were too tall to pass underneath the bridge, despite its clearance of over 131 feet.

The shipbuilder, Oceanco, proposed temporarily removing the center portion of the bridge to allow the vessel to pass through, which angered locals who felt Bezos was throwing his weight — and $162 billion fortune — around to dismantle a local landmark. Residents organized an event on Facebook to throw rotten eggs at the yacht when it passed by.

Last month, Oceanco scrapped its request, citing fears of vandalism and employee harassment. The company decided instead to have the yacht towed up the river, sans masts, which it did last week in the early hours of the morning.

Now, it seems that the yacht has been fully assembled and is one step closer to heading out to sea.

The existence of Bezos’ megayacht was first reported in Brad Stone’s book, “Amazon Unbound,” in May 2021. Currently known only as Y721, the yacht is predicted to cost $500 million and is expected to be “one of the finest sailing yachts in existence,” Stone reported.