Jackson Likely Confirmed In A Hurry. Getting On The Supreme Court? That’ll Take Time. 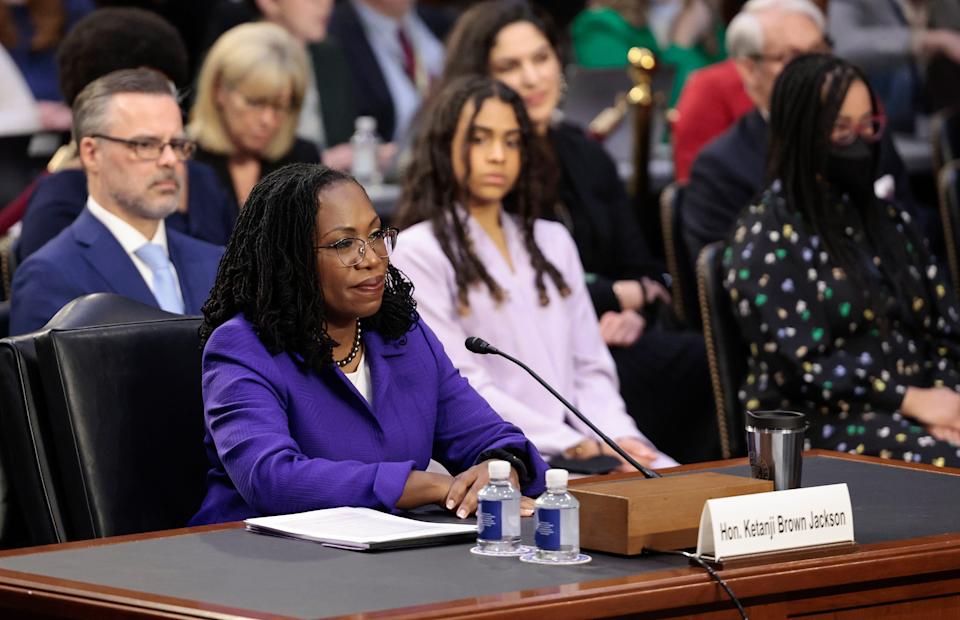 For Judge Ketanji Brown Jackson, taking a seat on the Supreme Court will be a study in hurry up and wait.

Assuming President Joe Biden’s nominee to the nation’s highest court is confirmed by the Senate this week, Jackson will have to sit tight for nearly three months for her spot on the bench to open – an unusually long delay that may have implications for public perceptions of the court, her ascension to it and a number of high-profile cases.

Jackson, 51, a judge on the U.S. Court of Appeals for the D.C. Circuit, is expected to replace Associate Justice Stephen Breyer, who announced his retirement in January but doesn’t plan to step down until the end of the Supreme Court’s term – probably in late June or early July. Jackson won’t take her place on the court until Breyer goes.

That waiting period is far longer than previous nominees faced; many of them were sworn in almost immediately after they were confirmed. Associate Justice Brett Kavanaugh was confirmed by the Senate on a Saturday afternoon in 2018. He was sworn in a few hours later at a private ceremony at the Supreme Court.

Associate Justice Amy Coney Barrett was confirmed by the Senate on Oct. 26, 2020, and was sworn in by Chief Justice John Roberts a day later.

Philosophy: Experts debate how Judge Jackson will interpret the Constitution

Cases: A look at the child pornography cases at issue in Judge Jackson’s hearings

The delay for Jackson could be confusing for the public, said Paul Collins, a professor of legal studies and political science at the University of Massachusetts Amherst.

“Some are likely to wonder why Judge Jackson won’t participate in the major cases of the term,” Collins said.

Senate Democrats want to confirm Jackson by the end of the week after four days of confirmation hearings last month in which she was peppered with questions about her judicial philosophy, her work as a public defender and her sentencing in child pornography cases. Her confirmation to be the first Black woman to serve on the Supreme Court is widely viewed as a foregone conclusion, since Democrats are in lockstep support and three Republicans – Sens. Susan Collins of Maine, Lisa Murkowski of Alaska and Mitt Romney of Utah – are on board.

She needs only a simple majority to be confirmed.

The high court is juggling hugely controversial cases this term, including a challenge to the 1973 Roe v. Wade decision that established a constitutional right to abortion. Also under consideration: a challenge to a New York gun regulation that, depending on how the court rules, could expand the ability of Americans to carry concealed handguns.

Because she did not take part in the oral arguments in those cases last year, Jackson wouldn’t have had a hand in those decisions anyway. But she would have taken part in cases to be argued this month, had she been on the court, including a major dispute over a high school football coach whose contract wasn’t renewed when he prayed at midfield after a game.

She’ll also miss a case about whether the Biden administration broke the law when it halted a policy requiring asylum seekers to wait in Mexico as their claims are processed.

Because Breyer will remain on the court, there’s a good chance he’ll write the lead dissents in some of those cases. The senior-most justice in the minority decides who writes the dissent – and often takes it for himself in the biggest disputes.

The wait between Jackson’s confirmation and her arrival at the court is a product of two circumstances: the unusually early announcement of Breyer’s retirement and the quick pace Democrats embraced to confirm Biden’s first nominee.

Durbin: Chairman at the center of a Supreme Court confirmation fight.

Supreme Court justices often announce their retirement close to the end of the term. Associate Justice Anthony Kennedy, the most recent member of the court to retire, announced his departure in June 2018. Associate Justice David Souter told President Barack Obama in May 2019. In both cases, the timing gave the White House until October – when the court returns from summer recess – to fill the vacancy.

Breyer’s announcement, by comparison, came in January. He made his departure conditional on a nominee being confirmed. That effectively moved the deadline for confirming his replacement up to the end of the term in June.

“What people may not have noticed is that Breyer’s retirement announcement was different than the last several announcements,” said Thomas Jipping, a senior legal fellow at the conservative Institute for Constitutional Government at the Heritage Foundation. “To be responsible, the Senate had to do it sometime this spring before the end of the term.”

Some Democrats were eager for a quick Supreme Court confirmation after Republicans sped through Barrett’s process before the presidential election in 2020. Democrats howled when the GOP confirmed Barrett in 27 days. By comparison, Biden’s party is on pace to confirm Jackson in about 38 days.

Assuming the Senate confirms Jackson, the next big step is for Biden to sign a commission that formally appoints her to the court. Once that happens, Jackson would take two oaths before becoming a justice: the same constitutional oath required of many officeholders and a second oath required by the Judiciary Act of 1789.

Judge Jackson will then be Justice Jackson.

Until that happens, Jackson will remain a judge on the D.C. Circuit. Experts said the extended delay is rare but not unheard of. Judge Justin Walker waited more than two months after his confirmation in 2020 before taking his seat on the D.C. Circuit. The Senate confirmed Walker in mid-June for a seat that did not open until early September.

What the wait means for Jackson – and her caseload on the D.C. Circuit – is not clear. Jackson’s chambers didn’t respond to questions about the process. At the very least, experts said, the wait will give Jackson more time to prepare for the new job.