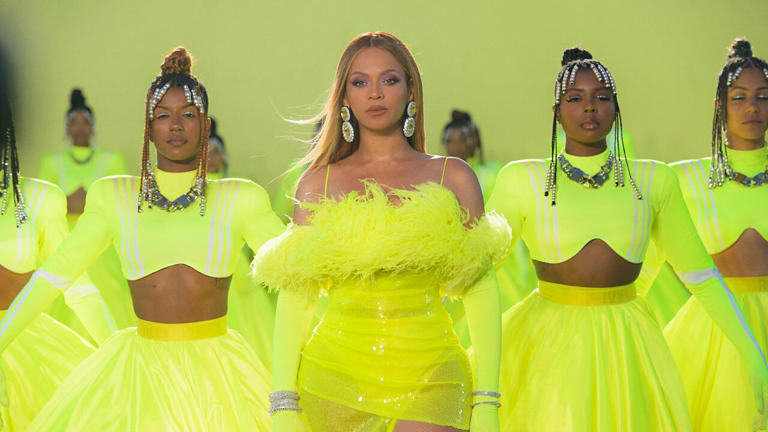 If Beyoncé takes home three awards in February, she will match the record for the most Grammy wins by any artist.© Mason Poole/A.M.P.A.S., via Getty Images

As reported by Ben Sisario, The New York Times

At the 2021 Grammys, Beyoncé picked up four awards, bringing her total to 28 and making her the winningest woman in Grammy history. At the 2023 ceremony, she will have nine chances to add to her total: The 41-year-old star is the top nominee for the 65th annual Grammy Awards, with all but one of her nods coming for her dance-heavy album “Renaissance.”

She leads a pack that includes Kendrick Lamar, with eight nominations; Adele and Brandi Carlile, with seven apiece; and Harry Styles, Mary J. Blige, Future, DJ Khaled and the producer and songwriter The-Dream, with six each, the Recording Academy announced on Tuesday.

The awards will be held on Feb. 5 at Crypto.com Arena in Los Angeles (the former Staples Center) in what the academy is hoping will be its return to something like normal operating procedure after two years of delays and complications caused by the Covid-19 pandemic.

Beyoncé’s nominations are in each of the three big all-genre categories — album of the year, plus record and song of the year for her single “Break My Soul” — as well as in the dance/electronic field and in R&B, where her tracks “Virgo’s Groove” (R&B performance), “Plastic Off the Sofa” (traditional R&B performance) and “Cuff It” (R&B song) were all recognized. She is also up for best song written for visual media for “Be Alive,” from the film “King Richard.”

Those bring Beyoncé to a career total of 88 nominations — tying Jay-Z, her husband, for the most received by any artist in the history of the awards. (Jay-Z, who had held the record with 83 nods, got five more this year, for contributions to “Renaissance” and DJ Khaled’s “God Did.”)

If Beyoncé takes three awards in February, she will match the classical conductor Georg Solti for the most Grammy wins by any artist. (She is already tied for second place in that race, with Quincy Jones.)

Despite the shower of nominations Beyoncé has received over the years, going back to her time in Destiny’s Child two decades ago, she has won only once in any of the four most prestigious categories: as a credited songwriter of “Single Ladies (Put a Ring on It),” which took song of the year in 2010. Every other victory has been in down-ballot genre fields.

In what is sure to be one of the night’s major story lines, Beyoncé will once again face Adele in multiple contests, including album of the year (“Renaissance” vs. Adele’s “30”) and both record and song of the year (“Break My Soul” vs. “Easy on Me”).

The two women, both titans of contemporary pop with ardent fan bases, last squared off at the 2017 Grammys. That year, Adele’s “25” beat Beyoncé’s “Lemonade” in a closely watched contest for album of the year that fed into longtime complaints that the awards often fail to recognize Black musicians in the most prominent categories. Accepting the award, a tearful Adele said, “I’m very grateful and gracious, but my artist of my life is Beyoncé.”

“Un Verano,” a streaming blockbuster and the year’s best-selling album so far, is the first release performed entirely in Spanish to be up for album of the year. Bad Bunny, the Puerto Rican star, is the top nominee at the Latin Grammys on Thursday, with 10.

For record of the year, which goes to the artists, producers and engineers behind a single track, “Break My Soul” and “Easy on Me” will compete against Styles’s “As It Was”; Lizzo’s “About Damn Time”; Doja Cat’s “Woman”; Lamar’s “The Heart Part 5”; Carlile’s “You and Me on the Rock,” featuring Lucius; Abba’s “Don’t Shut Me Down”; Blige’s “Good Morning Gorgeous; and “Bad Habit,” the breakout hit by the 24-year-old singer and guitarist Steve Lacy, who built his reputation as an innovator on the fringes of alternative R&B.

“Break My Soul,” “Easy on Me,” “As It Was,” “About Damn Time,” “Bad Habit” and “The Heart Part 5” are also up for song of the year, a songwriters’ award, along with Gayle’s “Abcdefu”; Bonnie Raitt’s “Just Like That”; DJ Khaled’s “God Did”; and Taylor Swift’s “All Too Well (10 Minute Version),” an expansion of a track that originally appeared on Swift’s 2012 album “Red,” which she rereleased as a fresh recording last year.

The Grammys generally disqualify old songs. But the long “All Too Well” satisfied a threshold rule because it contained more than 50 percent new material, the academy said. In addition to the song of the year nod, Swift is up for best country song with “I Bet You Think About Me (Taylor’s Version) (From the Vault).”

As has been the case in the last several years, there are prominent abstentions. Bruno Mars and Anderson .Paak, who won both record and song of the year in the most recent ceremony for their soul throwback project Silk Sonic, declined — “gracefully, humbly and most importantly, sexually” — to submit their album “An Evening With Silk Sonic,” as they told Rolling Stone last month.

And the Weeknd has kept to his promise, made in 2021 after his blockbuster album “After Hours” failed to receive any nominations, to boycott future submissions. Drake, who withdrew his name from the 2022 awards after the nominations were announced, has four nods as a featured artist or writer this time.

The ever-evolving Grammy process has gone through significant changes over the last few years, much of it in response to criticism that the awards were failing artists of color and that an opaque nominating procedure enabled insider manipulation. The ballot for the top categories expanded in 2019 from five slots to eight, and then last year — in an unusual last-minute rule change — from eight to 10.

Last year, the Recording Academy eliminated most of its nominating committees — anonymous groups of academy-appointed experts who whittled down the choices of its voting members to decide which artists made the cut in dozens of categories.

Apart from “craft committees” in the classical field and in other specialized areas like production and packaging, the ballots include only the selections by the 11,000 music professionals who are voting members of the academy, Harvey Mason Jr., the organization’s chief executive, said in an interview.

“With the nomination committees being removed, it’s a pure vote from our voter members,” Mason said. “The top vote-getters get the nominations. That’s it, end of story, period.”

Among the other changes this year is a new award, songwriter of the year (nonclassical), intended to recognize writers who create songs for other artists to perform. The addition was long sought by the class of professional songwriters, a major constituency in Grammy circles that finally gained an official Songwriters & Composers Wing in 2021.

Among other contests in the Grammys’ 91 categories this year, “Harry’s House,” “Voyage,” “30,” “Music of the Spheres” and “Special” are up for best pop vocal album. Ozzy Osbourne is nominated for best rock album, alongside the Black Keys, Elvis Costello & the Imposters, Machine Gun Kelly, Idles and Spoon.

“Mr. Morale & the Big Steppers” and “God Did” are up for best rap album, alongside Future’s “I Never Liked You,” Jack Harlow’s “Come Home the Kids Miss You” and Pusha T’s “It’s Almost Dry.”

For the last two ceremonies, both hosted by Trevor Noah, the Recording Academy and its producers have had to make major adjustments as a result of delays and venue changes forced by the pandemic. In 2021, it presented a scaled-down outdoor show with no audience, and for its 64th edition, in April, the Grammys moved to Las Vegas for the first time in the show’s history.

This year, the academy is looking forward to a return to its home turf, though the show will still have some Covid-19 protections in place, Mason said.

“I’m so tired of addressing Covid,” he said. “I’m so happy for it to go far, far away and never come back.”

“But” he added, “we’ll see where we are in three months.”