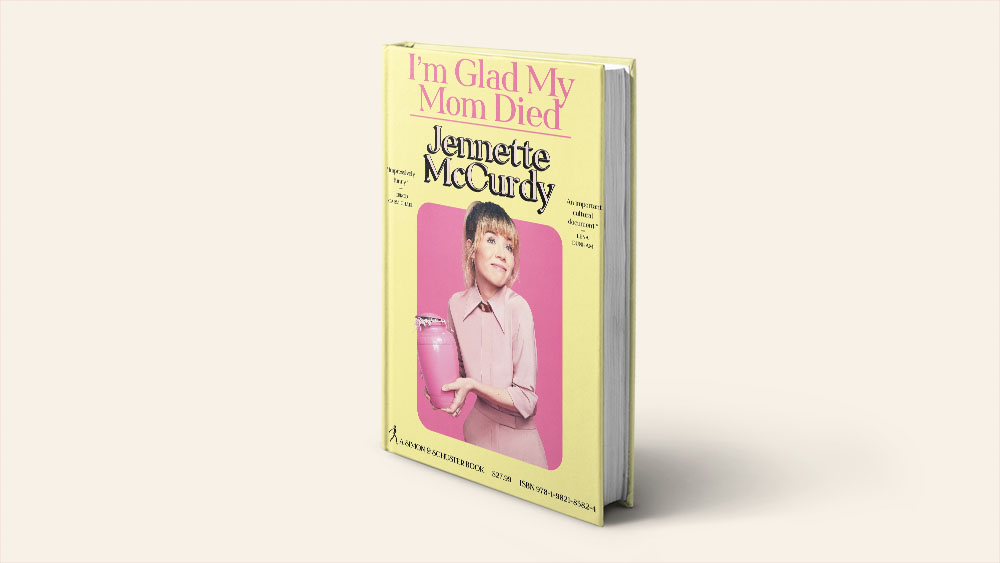 Jennette McCurdy is moving forward after looking back on her painful past.

McCurdy rose to fame as a child star in the mid-2000s with the Nickelodeon hit iCarly, playing sarcastic Sam Puckett on the series that focused on teenage vlogger Carly Shay (Miranda Cosgrove). After the show signed off in 2012 following six seasons, McCurdy reprised the role in 2013 on Sam & Cat opposite Ariana Grande for its single season run and then was a lead on the dystopian Netflix series Between.

But she moved on from acting after Between ended in 2016. McCurdy, 30, delves into her complicated relationship with her career, the spotlight and her mom, Debra McCurdy, who passed away from cancer in 2013, in her new memoir, I’m Glad My Mom Died, which has been quickly selling out since its release from Simon & Schuster on Aug. 9.

The book has generated plenty of headlines, with McCurdy describing her mom’s control over her life choices and the pressure on her at a young age to land acting gigs, which would end up supporting the entire family financially. McCurdy also describes her mom’s insistence that she look a certain way, leading the actress to develop eating disorders that would last throughout her years in front of the camera. After her mom’s death, McCurdy, who had struggled with feeling embarrassed by her TV projects, found the strength to drop her agents and begin her therapy journey.

Also spurring recent discussion has been the book’s description of her Hollywood experiences, including her close friendship with Cosgrove and her feelings of envy toward Grande, who was on the cusp of becoming a major pop star while shooting Sam & Cat. McCurdy mentions an intimidating figure on the set of iCarly, referred to in the book solely as “The Creator,” with McCurdy describing his angry outbursts on set and recalling him encouraging her to drink alcohol while underage. Dan Schneider, the creator of iCarly, Victorious and Sam & Cat, is not named in the book; Schneider parted ways with Nickelodeon in 2018, and a 2021 New York Times profile reported that the company investigated him prior to the split, with co-workers alleging that he was verbally abusive. (Schneider declined to comment on the investigation at the time.)

McCurdy, who recently starred in a one-woman show of the same name as the book, has been focused on hosting a podcast and directing short films. She decided to pass on appearing in Paramount+’s iCarly reboot that launched last year, and she’s grateful to be finding joy in writing and directing.

“I think I waited the appropriate amount of time in my processing before approaching this in any sort of a creative way,” she tells The Hollywood Reporter. “If you prematurely start approaching something creatively that has to do with your own life, you risk just overstepping your own private boundaries. And I didn’t want to do that to myself.”

During the below interview, McCurdy declined to discuss her passages about “The Creator,” her on-set experiences with former co-stars, her time on her Netflix series and her allegation in the book that Nickelodeon offered her $300,000 in perceived hush money upon her exit. (THR has reached out to Nickelodeon for comment.)

Among the topics discussed in the interview were her interactions with her family members during the writing process, her feelings about Sam being obsessed with food while the actress herself battled disordered eating, her ability to trust her traumatic memories and her hopes for a return to Hollywood on the other side of the camera — but possibly in front of it as well.

Now that the book’s release is behind you, and with it already a success in terms of sales, how does it feel to have this out in the world?

It is overwhelming in the best way. I can’t believe this reaction, and I am so grateful that it’s connecting with people the way that it is.

How long had it been a plan to write a book?

I had done therapy for at least six years and had really excavated so much of my emotional and mental health history privately before going anywhere near exploring it in a public-facing way. I think and hope that that kind of distance really helped me to be able to focus on, first and foremost, writing a good book and letting the fact that that book happens to be about my life be secondary.

You obviously cover a lot of painful memories, but you also include moments of humor. Was there an aspect to this process that was the most challenging?

I definitely laughed a ton while writing; I cried while writing. Because I’ve done so much of the work privately and for myself initially, I do think I was at a place where I was able to kind of discern what aspects of my life are legitimately entertaining and worth people reading about, and what aspects of my life are not entertaining. I think I waited the appropriate amount of time in my processing before approaching this in any sort of a creative way. If you prematurely start approaching something creatively that has to do with your own life, you risk just overstepping your own private boundaries. And I didn’t want to do that to myself.

You dedicate the book to your three older brothers. Did it take them some time to understand the title?

Not at all. My brothers have been so supportive, so understanding. They get the title, to put it simply. It was also a title that I knew I wanted early on. I wanted something that was bold and also something that I meant sincerely. I would never use a bold and attention-grabbing title if it weren’t authentic. I would never do it if it were just coming from a flippant place. That’s not my approach to humor. I knew that anybody who had experienced parental abuse would understand the title, and anybody who had a sense of humor would understand the title.

Was it tough to trust your memories, or did you have ways of tapping into those memories to make sure you were getting it right?

First of all, actors have the best memories. (Laughs.) And secondly, no. I have three amazing brothers who went through many of the things that I went through right alongside me. It’s been really great to be able to have their support and validation throughout all of it.

You mention in the early pages that names were changed, and “The Creator” is clearly a pseudonym. Was this a decision that was made for legal reasons?

It’s so funny to me that this is coming up because I just think the book’s so much more significant. The emotional arc and the storytelling of the book is about so much more than this aspect of it that I almost can’t believe it’s coming up. I’ve been so touched by how much the emotional thrust of the story has connected with people, which I see as being my relationship with my mom. That’s an important and complicated relational dynamic to explore, and to see that people are responding to it has been amazing. And to see people responding to the humor of it and the aspect of exploring eating disorders and complicated grief, it’s really been incredible.

How did your friendship with Miranda impact your experiences on the iCarly set?

In terms of infusing humor in writing about trauma, what went into the decision to approach it that way?

I love to connect deeply and authentically with people. That’s really important to me, and I try to make work that connects deeply and authentically with people. To me, that’s about being honest with the dynamic experience of being a person: the highs, the lows, the funny, the sad, the drama, the comedy. It’s all of those layers; it’s all of those colors. I see so many comments from people saying, “Oh, my God. I’m laughing, I’m crying, I can’t put this down.”

What was the goal of the book, both with what you were able to put out there but also in terms of your personal path?

The hope with the book was for it to connect with people, and I’m thrilled that it is, in such a powerful way. It’s amazing to see. I’m working on a novel and a collection of essays now, and I’ve just found that so fulfilling. Honestly, I hope to do more directing. I’ve directed like five short films. I’ve directed a lot of my own projects, and I really hope to do more of that — more writing and directing.

For any film projects, do you envision them as being comedic, or would there be emotional elements too?

Anything that I want to associate myself with would be exactly what I mentioned earlier, where it just covers the full colorfulness of what it means to be a person — the funny, the sad, oftentimes the funny and the sad happening at the same time in the same room. Anything where the humor comes from a grounded place, a place of character flaw, a place of best intentions gone awry. Humor that comes from humanity is sort of my mission. So if there’s anything that fits that, that would be my dream to be a part of.

After performing in the one-person show, have you thought about being in front of the camera again as well?

I definitely want to focus on writing and directing. That’s my main passion and what I’m most interested in. But throughout the process of writing this book, and I think only as a result of the healing that happened due to the writing of the book, that’s the only reason that I think I’ve been able to open the door to acting in some way. I don’t even know what that could look like. But I definitely would be excited to write and direct one.

You seem to be in a really healthy place now. Is there a message that you would have wanted to pass along to your younger self, or is there something you would have appreciated hearing back then?

I would have said, “You’re gonna be fine, kiddo. You’re gonna be able to fulfill your dream of writing and directing. Keep working hard, and keep being truthful in your work, and you’ll get there.” My life feels more aligned than it ever has. I’m so grateful for it.