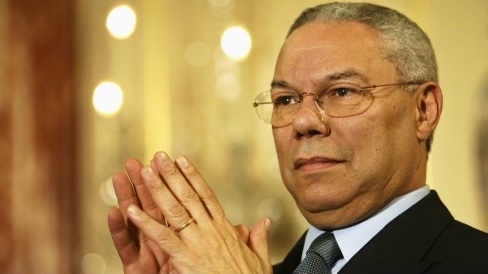 WASHINGTON – Colin Powell, the trailblazing soldier and statesman, has died from Covid complications at the age of 84.

He had been treated for multiple myeloma, according to NBC News. It is a type of blood cancer that hurts the body’s ability to fight infections. Fully vaccinated people with weakened immune systems make up a large proportion of hospitalized breakthrough cases, according to the Centers for Disease Control and Prevention.

Powell, who served in the military from the early days of the Vietnam era through America’s first war with Iraq, was the nation’s first Black national security advisor, chairman of the Joint Chiefs of Staff and secretary of State.

Leaders and former colleagues hailed him as a leader and a hero. Former President George W. Bush, whom Powell served as secretary of State, praised him as a “great public servant.” His successor at the State Department, Condoleezza Rice, called Powell “a truly great man.”

President Joe Biden called Powell his friend and fondly remembered that the late statesman and general “could drive his Corvette Stingray like nobody’s business.”

“Colin embodied the highest ideals of both warrior and diplomat. He was committed to our nation’s strength and security above all,” Biden said in a statement. “Having fought in wars, he understood better than anyone that military might alone was not enough to maintain our peace and prosperity.”

Biden ordered flags to be lowered in Powell’s honor through Friday.

Powell, who identified as a Republican, didn’t always toe the party line. He endorsed Democrats Barack Obama and Hillary Clinton during their presidential campaigns.

“You can be a Republican and still feel strongly about issues such as immigration and improving our education system and doing something about some of the social problems that exist in our society and our country,” he explained in an interview with MSNBC in 2014.

Obama on Monday called Powell “an exemplary patriot,” while remarking on the historic nature of the late leader’s accomplishments.

“Along the way, General Powell helped a generation of young people set their sights higher. He never denied the role that race played in his own life and in our society more broadly,” Obama said in a statement. “But he also refused to accept that race would limit his dreams, and through his steady and principled leadership, helped pave the way for so many who would follow.”

Powell most recently endorsed Biden in his run against then-President Donald Trump.

Powell’s death also triggered reminders of one of the darker moments in his otherwise distinguished career.

After four decades in public service as America’s top soldier, diplomat and national security advisor, Powell’s influence in shaping U.S. diplomacy was later marred by his argument for the Iraq War, which started in 2003.

Following America’s entry into lengthy wars in the Middle East, Powell admitted his support for combat in Iraq haunted him.

“General Colin L. Powell, former U.S. Secretary of State and Chairman of the Joint Chiefs of Staff, passed away this morning due to complications from Covid 19,” the Powell family wrote on Facebook.

“We have lost a remarkable and loving husband, father, grandfather and a great American,” the family said, noting he was fully vaccinated.

The family thanked the staff at Walter Reed National Military Medical Center in Maryland, where Powell was receiving care.

A spokesman for the hospital offered their condolences to Powell’s family in a statement, writing, “Walter Reed National Military Medical Center is deeply saddened by the passing of the former U.S. Secretary of State and Chairman of the Joint Chiefs of Staff, Colin L. Powell. In addition to his service to the nation, he also served as a devoted husband, father, and grandfather.”

Powell, the son of Jamaican immigrants, ascended the ranks to the pinnacle of America’s national security establishment during his military career. In 1987, former President Ronald Reagan tapped Powell to become his national security advisor, the first Black person to serve in that role.

President George H.W. Bush nominated Powell to be the youngest and first Black chairman of the Joint Chiefs of Staff. In that role, he oversaw America’s Desert Storm operations during the Persian Gulf war. He continued his role as chairman under President Bill Clinton.

After 35 years of military service, Powell retired from the U.S. Army as a four-star general in 1993. He was mentioned as a possible candidate for president several times

General Colin Powell (C), head of the US Joint Chiefs of Staff, tours 05 January 1990 the bombed courtyard of the Panaminian Defense Force Comandancia in Panama City to review US troops and receive a briefing on Operation Just Cause, the US invasion of Panama.Bob Pearson | AFP | Getty Images

In 2001, he became the first Black secretary of State under the younger Bush in a transformative appointment from combat soldier to statesman.

As the nation’s top diplomat, Powell faced an unprecedented assignment eight months into the job when 19 militants affiliated with the Islamic extremist group al-Qaeda hijacked commercial airliners with the purpose of carrying out suicide attacks against targets in the United States.

On the heels of the Sept. 11 terrorist attacks, Powell supported a swift military response against al-Qaeda.

US Secretary of State Colin Powell answers questions during a briefing 12 September 2001 at the State Department in Washington, DC.Joyce Naltchayan | AFP | Getty Images

Soon thereafter, the Bush administration turned its attention to Iraq. As talk of an invasion grew louder, Powell warned Bush in 2002 that “once you break it, you are going to own it,” referring to Iraq.

After being presented with an intelligence assessment that Iraqi President Saddam Hussein had amassed a deadly and dangerous arsenal, Powell went to the United Nations to make the American case for war with Iraq. In early 2003, during a 75-minute speech, Powell presented the global community with intelligence that claimed Iraq had weapons of mass destruction and also the ambition to produce more. Much of the information turned out to be incorrect.

Powell would later call the speech a “blot” on his distinguished record. In 2016, he said the speech was a “great intelligence failure.” Tens of thousands of people, including about 5,000 U.S. service members, died in the war, which lasted from 2003 until 2011.

“Laura and I are deeply saddened by the death of Colin Powell. He was a great public servant, starting with his time as a soldier during Vietnam,” Bush and former first lady Laura Bush wrote in a statement.

“He was such a favorite of Presidents that he earned the Presidential Medal of Freedom – twice. He was highly respected at home and abroad,” Bush wrote, adding that “many presidents relied on General Powell’s counsel and experience.”

The foundation of the late former President George H.W. Bush and first lady Barbara Bush wrote that America had lost a great man with a “remarkable career of public service.”

“General Colin Powell was an American hero, patriot, and statesman who inspired countless citizens through his remarkable career of public service. President Bush relied on Gen. Powell as a trusted advisor and confidant during the Gulf War, and countless other global challenges,” the foundation wrote.

“President Bush considered General Powell a dear friend. Our condolences, thoughts, and prayers are with Mrs. Alma Powell and the entire Powell family as America mourns the loss of a great man.”

“I’m deeply saddened to learn that America has lost a leader and statesman,” Cheney said in a statement. “General Powell had a remarkably distinguished career, and I was fortunate to work with him. He was a man who loved his country and served her long and well.”

Robert Gates, who became Bush’s Defense secretary after Powell left the administration, described him as a “great patriot and public servant.”

“A friend for nearly forty years, Colin’s whole life was about duty, honor and country. He is gone far too soon. My thoughts and prayers are with General Powell’s family.”