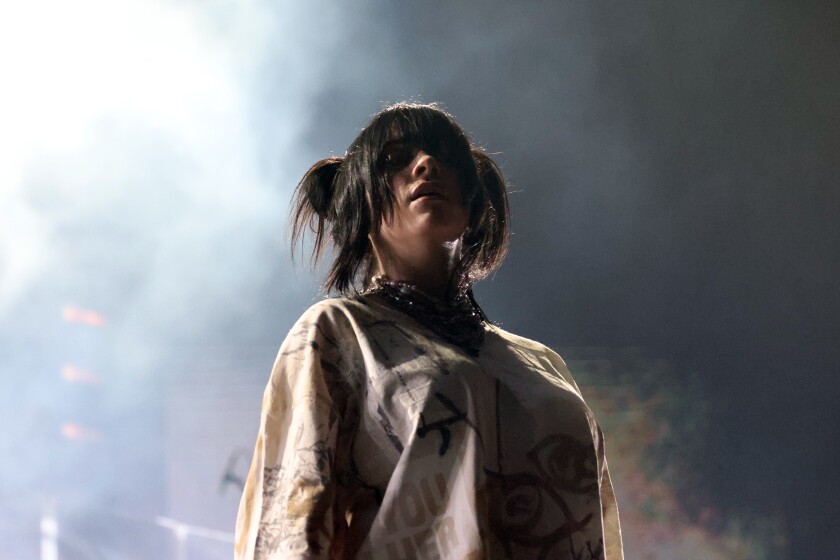 Set times for the weekend can be found here. Many performances will livestream on YouTube.

Not to be outdone by Harry Styles and his Friday-night moment with Shania Twain, Billie Eilish brought out another veteran of ‘90s pop — Damon Albarn of Blur and Gorillaz — during her headlining set Saturday night. Albarn, whom Eilish described as a pivotal figure in her musical development, sang Eilish’s “Getting Older” with his young host, then stuck around to perform Gorillaz’ “Feel Good Inc.”

12:20 a.m. Calling all hotties: Megan Thee Stallion set the main stage aflame (figuratively) with a rapid-fire blitz of her greatest hits. Poised like a deadly fembot in a chrome bodysuit, the “Savage” MC got the crowd jiggling along to “Body” and conjured the devil-may-care spirit of a much-missed Cardi B for their controversy-courting “WAP.” Megan cut short her breakneck flow to tend to a sudden wardrobe malfunction, but emerged after two minutes to rile up revelers once more with a new song, in which she dressed down Some Loser Who Will Remain Unceremoniously Nameless. (“Popping Plan Bs cause I ain’t plan to be stuck witcha,” she rapped, revealing little about the subject other than to say the track was “very personal.”)

9:41 p.m. “Hello, Coachella. My name is Danny Elfman, and I’ve got a strange little show for you.” That’s how the Oingo Boingo frontman turned Hollywood film composer introduced his gig Saturday night, and he was pretty much right: Leading a punchy rock band, Elfman sang one or two of his demented art-punk tunes, then let a full-on orchestra take over to do his eerie-whimsical movie music from the likes of “Batman,” “Spider-Man” and “Pee-wee’s Big Adventure.” At one point he combined the two approaches for a sequence from “The Nightmare Before Christmas,” for which he sang the part of Jack Skellington.

9:10 p.m. A brief message from Compton-born star guitarist Steve Lacy: “I said my album is done!” That is all.

9:08 p.m. Under the banner of record label 88rising, a parade of Asian pop and hip-hop stars — including Warren Hue (Indonesia), Milli (Thailand), Niki (Indonesia), Rich Brian (Indonesia), Hikaru Utada (Japan) and Jackson Wang (China) — plied the main-stage crowd with a procession of crazysexycool jams from a new compilation, “Head in the Clouds Forever.” The cavalcade culminated in a reunion of the fly-but-not-forgotten Korean girl group, 2NE1, starring CL.

9:02 p.m. Printed on the backs of the matching letterman jackets worn by the members of Brockhampton, who’ve said their two Coachella gigs will be their last: “All good things must come to an end!”

8:57 p.m. Inside a jam-packed Mojave tent, Baltimore darlings Turnstile pushed the case for hardcore at Coachella, as well as for the importance of upper body strength. “Pick your friends up!” egged on frontman Brendan Yates, who waited as fans hoisted their smaller friends onto their shoulders — perhaps to impart a lesson on pit solidarity. After executing a few punk-rock pirouettes, Yates took his own trust fall into the crowd, and the band shredded on.

7:30 p.m. A few years ago I spent an eventful weekend shadowing the U.K. dance duo Disclosure in Las Vegas, and since then I’ve occasionally wondered whether enough people still care about them to afford them the type of private helicopter ride we took from the Strip to a festival gig not terribly far from the Strip. Turns out they do! To judge by the overflow crowd at the Outdoor Theatre, at least, Disclosure remains very, very popular. And why not? “White Noise” and “F for You,” as they showed, still kill.

6:43 p.m. 100 gecs’ performance Saturday evening was as sparsely populated as any I’ve seen this weekend in the usually jammed Sahara tent (and that was with a 15-minute delay that should’ve allowed for any stragglers). But why? The L.A.-based hyperpop duo, dressed like wizards and accompanied by drummer Josh Freese, made a joyfully chaotic noise in old faves like “Stupid Horse” and new jams including “Doritos & Fritos.” Imagine Sleigh Bells covering DMX’s “Party Up,” then hope they get their due next weekend.

Back at the Outdoor Theatre, revelers got a taste of the Electric Cuco Acid Test. The psychedelic R&B singer and Hawthorne native led a trance-inducing set, where young lovers slow-danced and the band powered through despite the burgeoning dust cloud sweeping the stage. Winds are expected to pick up later in the evening — hold onto your bucket hats!

5:50 p.m. “How the f— you weirdos doing?” Surprises abounded at the Emo Nite DJ set: Between rowdy singalongs to My Chemical Romance and Papa Roach, the DJ duo of Morgan Freed and T.J. Petracca welcomed to the Sahara stage Plain White T’s singer Tom Higgenson for a campfire-style chorus of “Hey There Delilah.” Hellogoodbye frontman Forrest Kline also made a cameo — he not only dropped the 2005 nostalgia bomb, “Here (In Your Arms),” but spoke almost completely in autotune, delighting many a former scene queen.

5:43 p.m. Slow-burn R&B felt like a tough sell at go-go Coachella during Daniel Caesar’s slightly sleepy set last night (at least until a shirtless Justin Bieber popped in and inspired the deployment of several thousand camera phones). But Long Beach-born Giveon fared better today in a laidback yet vivid performance in the coveted Saturday-sunset slot. “I heard they’re live-streaming this, so I’d like to do a song for my exes,” he said to introduce the delightfully petty “Still Your Best.” “You know who you are.”

5:20 p.m. Inside the Gobi tent, Grammy nominee Arlo Parks and her band, encircled by sunflowers, provided a jazzy dream-pop oasis amid a windy desert day. Friday night standout Phoebe Bridgers stopped by to join Parks on the song “Black Dog.”

5:00 p.m. Sporting a hot-pink chiffon gown that billowed dramatically in the desert wind, Cali-born vlogger and balladeer Conan Gray may have been “dressed like bubblegum,” but he had much more to offer than sweet, sunshine-y platitudes. “Y’all might be at Coachella but I can tell y’all are depressed!” he said, arrestingly twee in his delivery, before launching into danceable, trauma-informed catharsis pop. — SE

4:12 p.m. One sign of how quickly new pop stars are made these days: Holly Humberstone telling the crowd gathered to see her in the Mojave tent, “This next song is the first song I ever put out, a little over two years ago.” The song was “Deep End,” about a rough patch her younger sister went through not long ago, and if the characters were young, the emotional wisdom felt as old as can be. — MW

4:00 p.m. Nothing hits like a cold brew and some power-pop on a Saturday. At the Outdoor Theatre, Chicago punks Beach Bunny amped up the crowd with feel-good songs about ditching bad-vibe dudes. They kicked off what should be a superb day at Coachella for anyone who ever got picked last in gym class. Must-sees include Angeleno indie-rockers Inner Wave, as well as Mannequin Pussy, Turnstile — and the Emo Nite DJ set, if you’re looking for a meet-cute soundtracked by Fall Out Boy. — SE

3:27 p.m. Greetings — again! — from Coachella, where it’s still hot (85 degrees according to my dust-covered iPhone) and where Harry Styles may have turned on a generation of teenagers to Shania Twain last night. This evening’s headliner is Billie Eilish, back at the festival after a star-making turn here in 2019 (when she herself was a teenager). But as always there’s plenty more to look forward to, including performances by Megan Thee Stallion, Holly Humberstone, Giveon, 100 gecs, Danny Elfman and the hip-hop boy band Brockhampton, which claims it’s breaking up after Coachella. Stay with us to see how it all goes down.