Child reporter who interviewed President Obama dies at the age of 23 of natural causes. 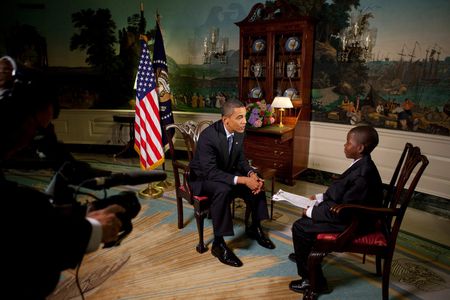 Damon Lazar Weaver Jr., the young reporter who won national acclaim after interviewing President Barack Obama at age 11 from inside the White House, has died, his family said.

The tenacious Florida boy whose big dreams led him to become one of the youngest people to interview a sitting president died May 1 at age 23, his sister, Candace Hardy, confirmed to local media outlets. Weaver died of natural causes, Hardy told the Palm Beach Post.

In a tearful interview with WPTV, Hardy said her brother texted her when she was at work to say he was in a hospital. By the time she got there, he had died, she said, sharing no details about the cause or circumstances.

The funeral for Weaver, who went on to conduct other high-profile interviews after his sit-down with Obama, was held Saturday in Belle Glade, Fla.“He was a light. He was the life of the party; everybody just couldn’t wait to be around him,” Hardy said in the interview with WPTV.

Weaver was born on April 1, 1998, according to his funeral announcement. He graduated from Royal Palm Beach Community High School in West Palm Beach and received a scholarship to Albany State University in Georgia, where he was studying communications. Because of the pandemic, he was back in Florida attending virtual classes when he died, Hardy told WPTV.

Weaver’s family could not be immediately reached for comment Sunday.

Weaver took his first steps in journalism in the fifth grade when he volunteered for a school newscast at Kathryn E. Cunningham/Canal Point Elementary School.

Brian Zimmerman, a teacher who helped the young student start his career as a reporter, recalled his first impression of the tenacious boy in an interview with the Palm Beach Post.

In 2008, Zimmerman was recruiting students who might be interested in being on-camera presenters for the school’s TV newscast when Weaver chased him down in the hall to volunteer for the program. The teacher recognized his talent right away.

“I just saw the potential for the way he was on camera. You could see his personality come through. He wasn’t nervous being on camera,” Zimmerman said.

Weaver landed his first big assignment in 2008, when he got to interview then-Sen. Joe Biden, who had been picked as Obama’s running mate and was at a campaign event at the Palm Beach County Convention Center.

In a video of the interview, the 4-foot reporter is seen wearing a tie over his school uniform and holding a microphone over his head while he asks Biden about the role of vice president.

After several requests to interview Obama, Weaver was called to the White House in 2009.

Wearing an oversize dark suit, Weaver sat across from Obama in the Diplomatic Room and asked questions that focused mainly on education, the key to success in life and his role as president. But there was a depth to the questions that went beyond his years.

“I live in Pahokee, Florida, which is a kind of poor town. What can be done to improve education for students that live in towns like mine?”

“As president, you get bullied a lot. How do you handle it?”

Weaver also made time for questions that appealed directly to him and his peers:“Do you have the power to make school lunches better?” Obama concurred that lunches “did not taste so good” when he was a boy and added that he was working to make school food healthier.

“Someone must be doing something right down at that school,” he said.

Weaver then asked Obama to be his “homeboy,” adding that Biden had already agreed. “Absolutely,” a smiling Obama said, shaking the boy’s hand.

The experience had a big impact on the young boy’s life.

“It was a one-in-a-lifetime experience,” Hardy told the Palm Beach Post. “That’s the only way to describe it. . . . It was life-changing for him.

In addition to the interview with Obama, he landed other one-on-ones with high-profile subjects, such as media mogul Oprah Winfrey, actor Samuel L. Jackson and basketball legend Dwyane Wade.

He was particularly impressed by Wade, who told him to “stick with my dreams,” according to an interview in 2015.

In 2009, Regina Weaver, his mother, told the Associated Press that said she felt “very proud” of her son and admitted being surprised by his accomplishments at such a young age. She also spoke of the hardship of being a single mother of five children.

Damon Weaver told the AP that he liked being a TV reporter because it allowed him to learn “a lot of things, get to meet nice people and travel a lot.”

He shared his plans and goals of becoming a journalist, and maybe a football player, an astronaut and president.

William Holmes, a pastor in the Pahokee area, remembered Weaver and the impact he had in the small Florida community.