Cardi B Reveals Meaning Behind ‘Up’ Chorus, Nails ‘Mimic Challenge’ on ‘Tonight Show’ 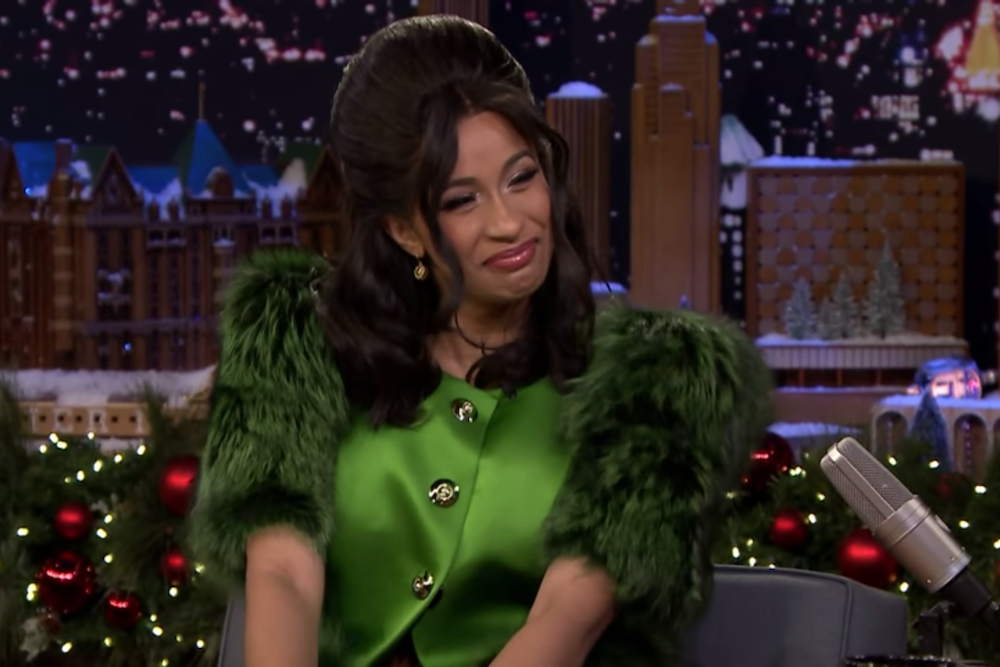 Cardi B Zoomed in to the Tonight Show on Thursday night (Feb. 11) to catch up with her pal Jimmy Fallon and talk about the whirlwind of activity she’s had since they co-hosted the show back two years ago.

The first thing Fallon wanted to know about was how Cardi ended up collaborating with Megan Thee Stallion on the No. 1 smash “WAP.”

“Well, I wanted a couple of girls in the song… you know when you have ideas like, ‘I want to have this and that girl in the song,’” she said, signature extra-long nails slicing through the air as she spoke. “I really wanted to have Megan but I didn’t know her that well. And our stylists linked us up.”

As it turns out, the pair clicked and the rest is, well, let Cardi explain.

“And she loved my song and she hopped on it and we made herstory!” Cardi laughed. The rapper also noted that she was nervous about releasing her new song “Up” because it was her first solo single in two years and she was feeling the pressure.

Speaking of pressure, when Fallon asked Cardi to explain the song’s catchphrase, “When it’s up then it’s stuck,” she said it’s a phrase her husband Offset says a lot, though she’s since learned it’s a common refrain all over the South.

“So, have you ever taken a poop, right?” Cardi began. “And it don’t come out? It’s just up and it’s stuck,” she added, as an uncomfortable-looking Fallon pretended to be searching for something under his desk. In good news, Cardi said she’s hard at work on her follow-up to smash 2018 album Invasion of Privacy, with a few more songs left to record and videos to shoot.

Cardi also broke down how hard it is to film visuals during the COVID-19 pandemic.  “There’s certain things that you can’t do… Like, I did this pyramid with some girls. And the pyramid, we had to do it in less than 10 seconds because it was more than six people,” she said of the lady pile in the “Up” clip. “And due to COVID, people can’t be touching. Even though you get tested before the music video three times — you get tested the beginning of the week, the day before, and the day of.”

But getting permission to lick each other was way, way harder. “We had to, like, beg,” she laughed. “[There] cannot more than 10 people in a room. It’s just the craziest protocols….  if you work in production, you understand it’s the craziest thing ever.” The rapper, who doesn’t drive, also talked about her role in the delayed ninth episode in the Fast & Furious franchise.

Cardi stuck around to play a game of the “Mimic Challenge” with Fallon, in which each contestant made noise with an object and the other had to replicate it with their voice. Cardi was up first an nailed the “click, click” of a pen, while Jimmy had a bit of trouble trying to make his voice sound like a set of keys. “You sounded like an old phone, but okay,” she said, with Fallon joking that “old phone” was his rap name back in the day.

When Fallon chomped on some chips Cardi aced it again, with Jimmy coming up short one more time, not quite landing the sound of a straw being pushed in and out of a paper cup lid. “I’m not liking how you guys are giving me the hard ones to mimic,” Cardi complained when Fallon busted out a hand-crank pencil sharpener. “And I feel like you guys are cheating. And I don’t feel like a welcomed guest,” she said in mock upset.

Things just got nuttier from there, with Cardi making a champagne popping sound and joking that she could mimic the sound of a tiny horn if “air was coming out of my butt.”

Watch Cardi on The Tonight Show below.