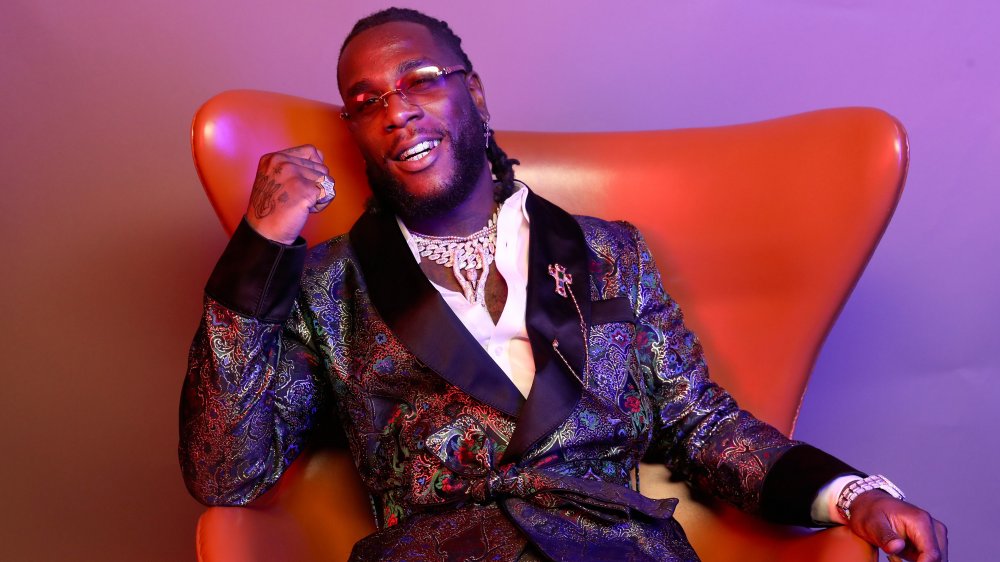 The Nigerian singer is on a mission to bring his passion for his homeland to the world’s biggest stages. Selling out Madison Square Garden was just the beginning.

Burna Boy is soaring over the crowd at Amsterdam’s Ziggo Dome, yelling the Yoruba term that loosely means “move your legs.” His six-foot-one frame explodes into the air, seemingly powered by enough energy to fuel the Space Drift Tour race car he zoomed onto the stage in earlier. Wearing a blue custom Botter jumpsuit, he looks like some kind of Afro-futurist astronaut, ready to fly even higher.

“He gives his all. And when he comes off [stage], you’ll see him in the dressing room, falling flat out on the floor and shaking,” says his younger sister Ronami Ogulu, who’s also his stylist and creative director. “Then he comes up and we patch him all together and we go again the next day.”

Three days later, Burna is in South London and decidedly more earthbound, slouched in an antique red leather chair. He takes long, drawn-out puffs from his Backwood, taking care that his denim Off-White ensemble doesn’t turn into a designer ashtray. He speaks in aphorisms, like “It is better to stick with the devils you know” (why he keeps family, including his sister and “momager” Bose Ogulu, on his team) and “I hope for the best and am prepared for the worst” (when he thinks about the future of the African continent). When he laughs, tiny diamond tooth gems glint at the edges of his kilowatt smile. When he’s finished answering a question, he gestures toward me with his hand and sternly commands, “Proceed.”

Especially for a fellow African who shares his passion for our motherland, an audience with Burna feels a bit like one with a dignitary. And while he may have just flown here from Amsterdam a few nights before, his exhaustion does not take precedence over his calling — his mission — to spread his signature Afro-fusion music all over the world. “It has always been my vision to build a bridge between all Black people in all parts of the world through the music and performance,” he states. “Music is the No. 1 messenger.”

The 30-year-old artist, born Damini Ebunoluwa Ogulu in Port Harcout, Nigeria, now splits his time between London and Lagos. And as his career gets more globe-spanning, the concept of his homeland seems to only become more and more important to him — and central to his identity as an artist. After pandemic delays, he has finally been touring the songs from his fifth album, Twice as Tall, released nearly two years ago on Atlantic Records/Bad Habit/Warner Music International and his own label, Spaceship Collective.

It won the 2021 Grammy Award for best global music album, along with the praise of Nigeria’s minister of information and culture, Alhaji Lai Mohammed, who called the award “a global endorsement for the Afrobeat genre of music that has propelled Nigeria’s increasing dominance of the music world.” And Burna is adamant that his signature “Afro-fusion” sound — a blend of Afrobeats folklore, dancehall riddims, hip-hop swagger, reggae and R&B, all sung in his distinct baritone mix of Yoruba, English and pidgin — is leading the way.

“It’s making people who don’t even speak the same language start dancing with each other,” Burna says. Even in his more vulnerable lyrical moments, “you’re dancing to it,” he explains with a hearty laugh. “At that point, it becomes bigger than me.”

Over the last couple of years, Afrobeats has steadily migrated West thanks to crossover hits like Wizkid and Tems’ Billboard Hot 100 top 10 “Essence” and CKay’s “Love Nwantiti (ah ah ah),” which became the first-ever No. 1 on Billboard’s new U.S. Afrobeats Songs chart in April. As the genre’s profile has risen abroad, more Afrobeats artists have, post-lockdown, embarked on their first U.S. tours, and among that group, Burna has played the biggest stages yet — the kind that can mint superstars. With historic sold-out shows at London’s Wembley Arena and Paris’ Accor Arena already accomplished, he became the first African artist to headline Los Angeles’ Hollywood Bowl in October 2021. Then in April, he became the first Nigerian act to headline and sell out New York’s Madison Square Garden.

“He’s a fantastic performer. Even though I’ve watched Burna more than 100 times onstage, I still get excited,” says Osita “Duke” Ugeh, who, as CEO of promoter Duke Concept, has been booking U.S. tours for African acts like Burna for the last decade. (He secured Burna’s first sold-out U.S. show in April 2019 at Harlem’s Apollo Theater — where he again made history as the first Afrobeats artist to sell out the venue.)

But as Ugeh knows well, Burna’s arrival at the Garden was far from preordained. Since founding Duke Concept in 2013, he has struggled to get artists like him into big rooms. “[Production managers and theaters] would be under the assumption that Afrobeats artists cannot sell this number of tickets. They didn’t believe in the genre,” Ugeh recalls. In 2019, even as he and Mr. Eazi made history as the first Afrobeats performers to play Coachella, Burna grumbled about the tiny printing of his name on the festival slate. “l am an AFRICAN GIANT,” he wrote on his Instagram story. “I represent a whole Generation of SOLID AFRICAN creatives going Global.”

“We took the stairs,” Bose says, quoting her son’s description of the slow path he was forced to take in the live sector. “We didn’t do any elevators. We spent a lot of time and money planning to go around the world. We ran through the label’s tour support pretty quickly, so we were using money he’s making from shows in other places, particularly in Africa, to bankroll our initial touring. Yes, it has been hard, but there is no way we’re performing 16,000- to 20,000-capacity venues when we didn’t start with 3,000.”

Now, as Afrobeats continues to expand its reach, Ugeh says he and his 15-person team are starting to see that reflected in the kind of venues the genre’s artists can play: He has gone from booking two to three U.S. tours for Afrobeats artists a year to booking two to three a month, with Davido, Tiwa Savage, Rema and more scheduled for later this year. A different concert promoter, Cokobar, is helping Burna book shows in the United Kingdom and France. And with both the Bowl and the Garden in the books — as well as recent gigs at the Outside Lands and Governors Ball festivals last year — Burna and his team have their sights set on bigger stages, and more of them. “When the artist gives you good music, and gives you a fantastic show, you’re able to sell the artist,” Ugeh says. “Burna puts in the work with his performance, his production.”

When his “One Night in Space” show at the Garden was announced in December, Duke Concept launched a joint venture with Live Nation, expanding upon a relationship that began in 2018, when Burna himself approached the company about a tour deal. He insisted on bringing Ugeh along; subsequently, UTA’s Christian Bernhardt, Burna’s touring agent, introduced Ugeh to Live Nation’s director of touring, Andy Messersmith.

“The deal is a good one because it also gives us access to a lot of their stages across the world, which is what we’re talking about — trying to get the artists in the right rooms,” Ugeh says. “Burna paving the way in the North America arenas shows that it can be done. It makes it easier for every other person coming right behind him to get to that place.”

Selling out the Garden was one kind of history; opening the door for other African artists to do so could be another huge staircase to climb. But Burna is used to it, and no one’s more confident in his abilities than he is. “It’s like I’m better at [performing] than making music. And that says a lot because I’m really good at making music,” he says with a loud laugh, the gems on his teeth sparkling. “You see how with Christ, there’s B.C. and A.D.? I feel like that’s how it is for me with performing. There’s going to be a ‘Before Burna Came’ and ‘After Burna’s Death’ time period in the performing arts world. That’s my legacy.”