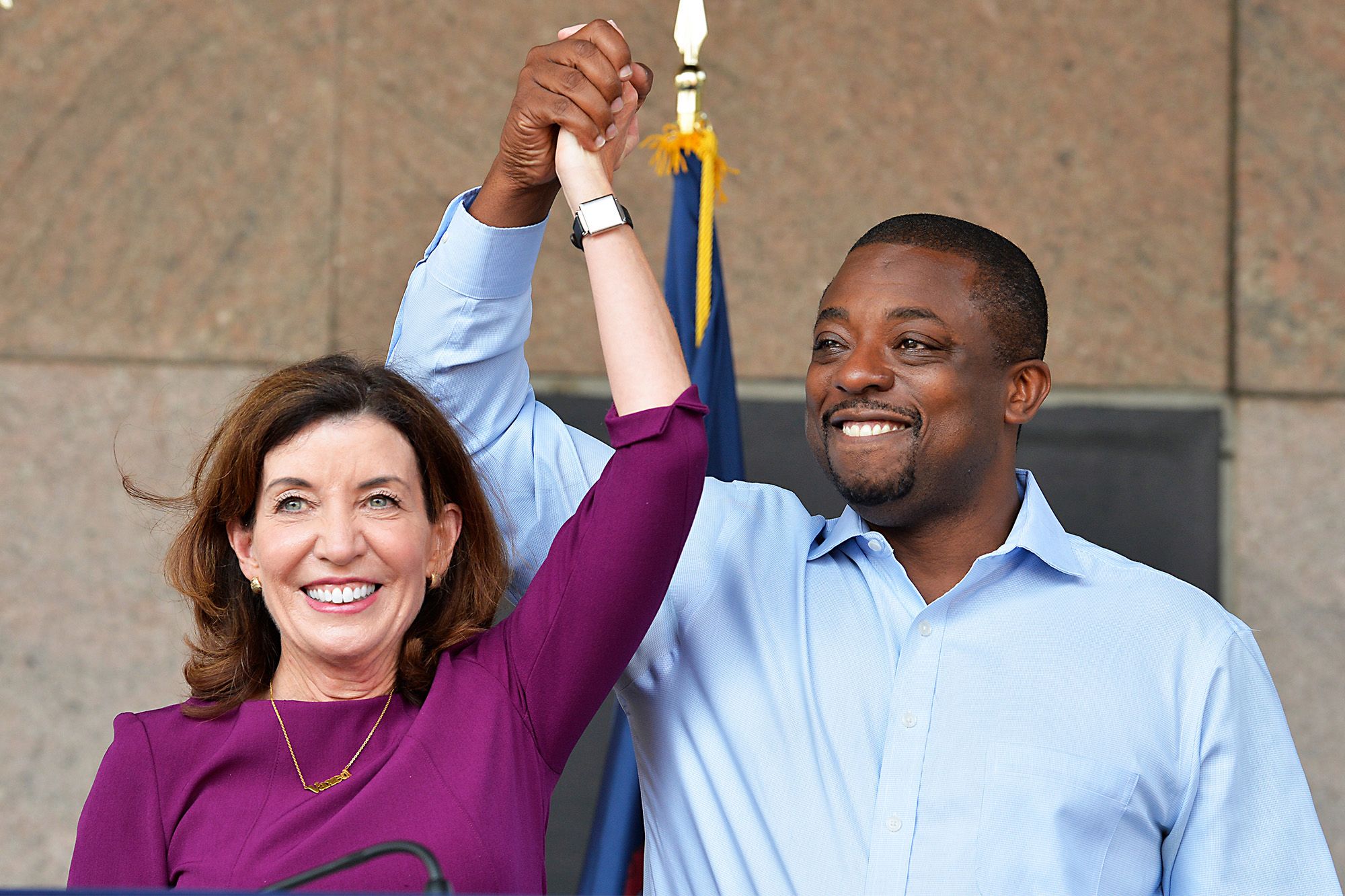 “New York state, I will do everything I can to make sure that those who are living at the margins, those who are struggling, those who are overlooked, will have a seat at the table,” said Benjamin following his official swearing-in ceremony at Hochul’s Manhattan office on Third Avenue, conducted by Judge Analisa Torres of the Southern District of New York.

Benjamin’s portfolio will include a three-part approach, starting with pandemic recovery, including combating vaccine hesitancy in poor and minority communities with lower vaccination rates.

He will also focus on getting federal rent relief dollars tied to the emergency rental assistance program out the door faster for struggling renters and tenants, as just $300 million has been distributed thus far from the $2.8 billion program.

Benjamin will also head a new NYCHA task force, working on building repairs and other resident needs, which he experience with, hailing from Harlem’s 30th state Senate District.

Hochul praised her No. 2, emphasizing the importance of partnership and working together — elements that were known to have been lacking in her relationship with Cuomo when she served as his lieutenant governor.

“I can’t do it alone. I need someone on my side. Someone who I also rely upon for their wisdom and their guidance and the local knowledge of issues,” said Hochul.

“I found a person who knows what it’s like to struggle, to work hard, to make something of his life and to now return his service to the community,” she added.

A special election to fill Benjamin’s vacated state Senate seat will be tied to the Nov. 2 elections, as previously stated by Hochul.

But wait…Brian Benjamin sworn in as N.Y. lieutenant governor but questions loom about wedding, stock

Benjamin, who stepped down as a state senator representing Harlem to take the job, appeared with his pregnant wife, daughter and parents at the ceremony and praised Hochul, who hails from Buffalo, for laying the foundation for a more inclusive administration, both geographically and ethnically.

“Gov. Hochul wants to make sure that we all have a seat at the table,” he said. “You asking me to join the administration has made it abundantly clear that you want upstate and downstate, every ethnicity, every culture to feel included. And for too long, people have not felt included, that they have a seat at the table, that their issues would be brought to the forefront, and I’m proud to say that you are creating an administration that will do so.”

The swearing-in was clearly a heartfelt moment for Benjamin’s family. As he took the oath, his adorable daughter tugged on her mother’s pearl necklace and his parents stood proudly behind him.ADVERTISEMENT

Benjamin vowed to work with Hochul to improve living conditions in New York City Housing Authority apartments and ensure that federal rent relief is delivered to tenants and landlords more quickly. He said he’d focus on combating people’s hesitancy to be vaccinated for COVID as well, particularly in places “where there is less knowledge about the vaccine.”

But during the question-and-answer session after his swearing-in, Benjamin declined to publicly take questions from the Daily News about the circumstances surrounding his use of his Senate campaign account to pay for “constituent services” at a Harlem jazz club at almost exactly the same time he and his wife held their wedding celebration there.

Hochul, who was then herself lieutenant governor, appears to have attended the party, along with state Sen. Zellnor Myrie, Assembly members Diana Richardson and Inez Dickens and Councilman Bill Perkins.ADVERTISEMENT

After his swearing-in, Benjamin reached out to The News to explain the situation.

When Hochul first announced her choice of him as lieutenant governor on Aug. 26 she said the wedding matter had been investigated and resolved, but at the time would not say by whom or when. And despite numerous attempts since then to pry more details from Hochul, Benjamin, the Board of Elections and the state police who conducted the background check into Benjamin, those questions remained unanswered — until after the swearing-in ceremony.

After taking his oath Thursday, Benjamin told The News that a Board of Elections lawyer contacted him in early August with questions about how the wedding party was paid for. Benjamin did not provide the exact date he first had contact with the Board, but initially told The News on Thursday that in early August he decided to reimburse the campaign out of his own pocket.

Benjamin spokesman Jordan Bennett later said that the then-state senator agreed to make the reimbursement mid-month, on Aug. 15, but he declined to provide the BOE email that precipitated that payment.

The agreement to reimburse his campaign came five days after Gov. Cuomo announced he’d be resigning and as Hochul would have been preparing to assume control of state government — and appoint a new lieutenant governor.

“They wanted to discuss it and understand what happened,” Benjamin said of his initial interactions with the Board of Elections. “I proactively stated I will reimburse the committee … they said that was an acceptable resolution.”

The Daily News political team supplies the essential news and analysis on the critical 2021 elections in New York City that will define the city’s future after coronavirus. Sent to your inbox every Monday, Wednesday and Friday.

The check, he said, wasn’t written until Sept. 2, though — several days after Hochul publicly tapped him as her choice for lieutenant governor.

The News story that got Benjamin in hot water in March also detailed other questionable expenses such as repairs at a Virginia auto body shop and travel expenses to Rhode Island. Benjamin said Thursday that the wedding was not the only issue the Board inquired about, but declined to say what else they questioned him on.

Benjamin also faced criticisms during his recent city comptroller run after The News revealed he was earning a salary from a company led by a Wall Street exec who came under fire for his role in the 2008 subprime mortgage crisis. Benjamin subsequently stepped down from the job, but came under fire more recently for holding onto shares of the company, which arranges exorbitantly high-interest rates.

On Thursday, he attempted to address that controversy as well.

“My record actually speaks for itself on this,” he said. “I support making sure we don’t have extremely high-interest rates on loans for hard-working Americans.”