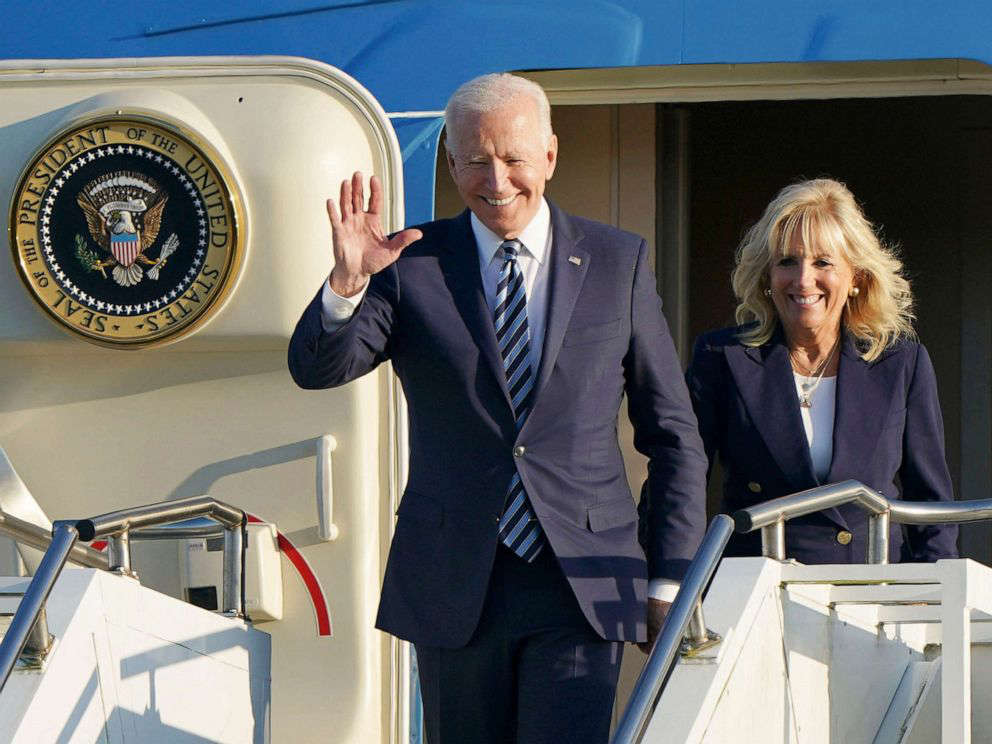 On the eve of the G-7 summit, President Joe Biden held his first face-to-face meeting with a foreign leader — British Prime Minister Boris Johnson — and the two were expected to discuss all aspects of the longstanding alliance between the United States and the United Kingdom.

Before their formal talks, Biden, Johnson and their spouses took a stroll overlooking Carbis Bay, and despite the cloudy day in Cornwall, Biden joked he may not leave.

Johnson was a key ally of former President Donald Trump, and Biden once called him a “physical and emotional clone” of Trump, but the two men were all smiles on Thursday before cameras ahead of a bilateral meeting with officials from both countries.

Later, sitting down inside for another photo op, Johnson welcomed Biden to Cornwall, and Biden said it’s a pleasure to meet the prime minister and his new wife, Carrie, whom Johnson noted had gone off with first lady Jill Biden to take tea.

“I told the prime minister, we have something in common,” Biden said. “We both married way above our station.”

Johnson replied, “I’m not going to disagree with the president on that, or indeed on anything else, I think highly likely,” setting a friendly tone.

The U.K. is hosting the G7 summit that starts in Cornwall on Friday, and the White House has said that the fact that Biden is meeting with Johnson first shows the special significance of the U.S.-U.K. relationship.

But despite what’s long been called a “special relationship” between the two countries, the leaders have their differences. For one, Biden did not support Brexit, while Johnson led the movement to break from the European Union. The White House has also made clear Biden wants no changes in the Good Friday agreement on Northern Ireland.

Administration officials said Thursday that the key priorities of the meeting will be on “the pressing set of global challenges”: COVID-19, climate change, counter-terrorism, Afghanistan troop withdraw, Indo-Pacific challenges, Russia and the Middle East.

“There’s the security dimension, with an unparalleled defense and security alliance promoting stability worldwide,” an administration official told reporters Thursday. “There’s an economic dimension, the robust economic partnership between our countries, sees the UK as our largest investment partner, and the fourth largest trading partner for the United States. And of course, the relationship is also about democratic values,” the official said.

Biden and Johnson also recommitted a new Atlantic Charter, 80 years after President Franklin Roosevelt and Prime Minister Winston Churchill signed the original agreement in 1941, which the two leaders viewed together and heard about its history ahead of their bilateral meeting, which ran 90 minutes. The charter has been updated to address cyberthreats, health crises, and other modern challenges.

“It’s about time that the original gets refreshed,” an administration official said. “The original really outlined what the post-World War world order could and should look like. This new charter will make clear what the coming decades of the 21st century can and should look like from the perspective of common values and common aspirations for people everywhere.”

The U.S. and the U.K. will also be releasing a joint statement later Thursday announcing new initiatives committing to work together in the areas of science, technology, energy and health. Among them, there will be a launch of a working group to reopen travel between the U.S. and the U.K. and a commitment to hold a cancer summit.

Later in the day, Biden is slated to announce 500 million doses of COVID-19 vaccine to distribute around the world, announced as he began a series of high-profile summits in Europe. The goal, according to national security adviser Jake Sullivan, is to make the U.S. “the arsenal of vaccines,” like the nation was “the arsenal of democracy during World War II.”