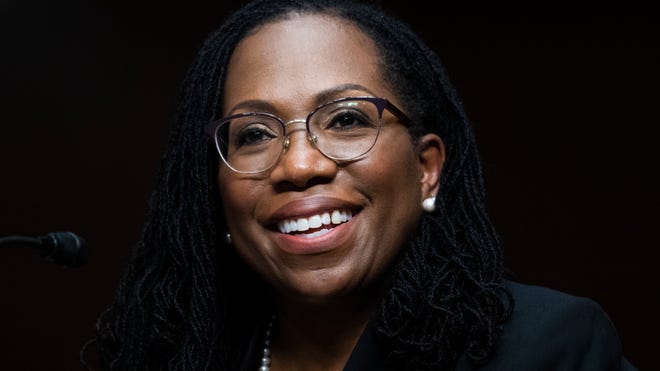 President Biden praised Ketanji Brown Jackson as he introduced her to the nation as his nominee to the Supreme Court in remarks at the White House.

The nomination sets in motion a historic confirmation process for the first Black woman to sit on the highest court in the nation.

“It is my honor to introduce to the country a daughter of former public school teachers a proven consensus builder and an accomplished lawyer and distinguished jurist, on one of the nation’s most prestigious courts. My nominee for the United States Supreme Court is Ketanji Brown Jackson,” Biden said.

Biden reiterated that the decision is one of the “most serious constitutional responsibilities a President has” and said that the process to select her was “rigorous.”

“I promised the process will be rigorous and I would select a nominee worthy of the Justice [Stephen] Breyer’s legacy of excellence and decency, someone extremely qualified with a brilliant legal mind, with the utmost character and integrity, which is equally important,” he said.

Biden went on to praise Jackson’s career as a public defender and in private law practice.

“If confirmed, she will join Justice [Sonia] Sotomayor as the only other member of the United States Supreme Court who has experience as a trial court judge, a critical qualification in my view,” he added.

Read more about the nominee’s career here.4 min ago

A look back at Ketanji Brown Jackson’s legal career

As a judge in Washington, DC — where some of the most politically charged cases are filed — Ketanji Brown Jackson issued notable rulings touching on Congress’ ability to investigate the White House.

As a district court judge, she wrote a 2019 opinion siding with House lawmakers who sought the testimony of then-White House Counsel Don McGahn. Last year, she was on the unanimous circuit panel that ordered disclosure of certain Trump White House documents to the House January 6 committee.

Biden first committed to nominating a Black female US Supreme Court justice when he was running for president in 2020. On a debate stage in South Carolina, Biden argued that his push to make “sure there’s a Black woman on the Supreme Court” was rooted in an effort to “get everyone represented.”

Jackson was born in the nation’s capital but grew up in the Miami area. She was a member of the debate team at Miami Palmetto Senior High School before earning both her undergraduate degree and law degree at Harvard.

At her 2021 confirmation hearing for the appellate court, she connected her family’s professions — her parents worked in public schools — to her decision to work as a public defender.

“I come from a background of public service. My parents were in public service, my brother was a police officer and (was) in the military,” she said at the time, “and being in the public defenders’ office felt very much like the opportunity to help with my skills and talents.”

Former House Speaker Paul Ryan, a Republican, is a relative by marriage and introduced her at the 2013 hearing for her district court nomination.

Conservatives have already previewed how they will scrutinize her record defending Guantanamo Bay detainees as a public defender. The role she played in her uncle’s successful efforts to seek a commutation from former President Barack Obama has also attracted attention. When she was in private practice in 2008, she referred her uncle’s file to the firm Wilmer Hale, which several years later submitted the file.

As a judge, some other notable cases she has in her record are a 2018 case brought federal employee unions where she blocked parts of executive orders issued by former President Donald Trump, and a case where she ruled against Trump policies that expand the categories of non-citizens who could be subject to expedited removal procedures without being able to appear before a judge.

Jackson penned more than 500 opinions in the eight years she spent on the district court.

Read more about her life and career here.11 min ago

President Biden is delivering remarks at the White House announcing he has selected Ketanji Brown Jackson as his nominee to the Supreme Court.

The nomination will set in motion a historic confirmation process for the first Black woman to sit on the highest court in the nation.

Jackson, 51, currently sits on DC’s federal appellate court and had been considered the front-runner for the vacancy since Justice Stephen Breyer announced his retirement.

She received and accepted Biden’s offer in a call Thursday night, a source familiar with the decision told CNN, but was present for DC Circuit Court hearings Friday morning.

From the beginning, Jackson was the leading contender, but the official said the President gave “considerable weight” to other finalists, including Judge J. Michelle Childs and California Supreme Court Justice Leondra Kruger.

More on Jackson’s career: She clerked for Breyer and served as a federal public defender in Washington — an experience that her backers say is fitting, given Biden’s commitment to putting more public defenders on the federal bench. She was also a commissioner on the US Sentencing Commission and served on the federal district court in DC, as an appointee of President Barack Obama, before Biden elevated her to the DC Circuit last year.

What lawmakers are saying: While Democrats praised the qualifications of Biden’s choice, potentially the first Black woman to serve on the court, Republicans criticized her educational background, her record on crime and the support she holds from left-wing groups.

Sen. Lindsey Graham of South Carolina, who voted for Jackson to serve as a judge on the US Court of Appeals for the District of Columbia Circuit eight months ago, appeared to unfavorably consider her nomination, saying in a tweet that “the radical Left has won President Biden over yet again.”

CNN’s Alex Rogers contributed reporting to this post.8 min ago

From CNN’s Zachary B. Wolf

President Biden is set to announce Ketanji Brown Jackson as his Supreme Court nominee soon from the White House and the nomination will now spark a slew of events on Capitol Hill.

Here are key things to know about the process and how it could play out:

What happens next? There will be hearings in the Senate Judiciary Committee, which is chaired by Illinois Democrat Dick Durbin. Activist groups and senators will pore over the nominee’s record. Usually the candidate is a judge, but there’s no requirement in the Constitution that the person be a judge or even a lawyer. That’s just the recent custom.

How long does it take to confirm a Supreme Court justice? The confirmation process timeline varies. For instance, with the 2020 election bearing down and the likelihood they would lose control of the Senate, Republicans pushed through Amy Coney Barrett’s nomination in lightning speed — less than a month. Before that, the last nomination to proceed to confirmation in less than two months was Ruth Bader Ginsburg’s back in 1993. These things usually take months.

But Democrats may well lose control of the Senate in the November midterm elections, so they’ll work to move this process along. Senate Majority Leader Chuck Schumer is looking to the Barrett timeline as a model, according to CNN’s reporting.

How many votes does it take to confirm a new Supreme Court justice? It takes 51 votes in the Senate — a simple majority.

Why not 60 votes? Republicans are adamant about maintaining a 60-vote threshold for legislation. But they actually nuked the filibuster for Supreme Court nominees during the Trump administration, so confirmation takes only a simple majority.

Vice President Kamala Harris can break a 50-50 tie, which is a real possibility in these partisan times. There are 50 Republicans, 48 Democrats and two independents who usually vote with Democrats. It’s a split chamber.

Will any Republicans vote for Biden’s nominee? Overwhelming support for nominees, regardless of their political views, used to be routine. Breyer is seen as a liberal justice but he was confirmed 87-9. That kind of bipartisanship has not been seen in recent years.

None of former President Trump’s nominees received more than 54 votes. Keep an eye on the more moderate Republicans, like Sens. Susan Collins of Maine and Lisa Murkowski of Alaska.

Will all Democrats vote for Biden’s nominee? West Virginia Sen. Joe Manchin has shown himself to be perfectly willing to buck the party line. Democrats will have to find a nominee he can support, but will also need to consider other potential wild cards in the Senate.

What will the top issues be? Voting rights is sure to be a key issue as Democrats make that one of their top priorities heading into the 2022 midterm elections and after a raft of decisions by the current court.

Abortion has previously been a key issue during nomination battles. The current court seems poised to either overturn or drastically scale back Roe v. Wade. The list goes on.

One thought on “History Made: Biden formally announces Ketanji Brown Jackson as his SCOTUS nominee, calling her a “proven consensus builder””