Air Conditioning Will Not Save Us 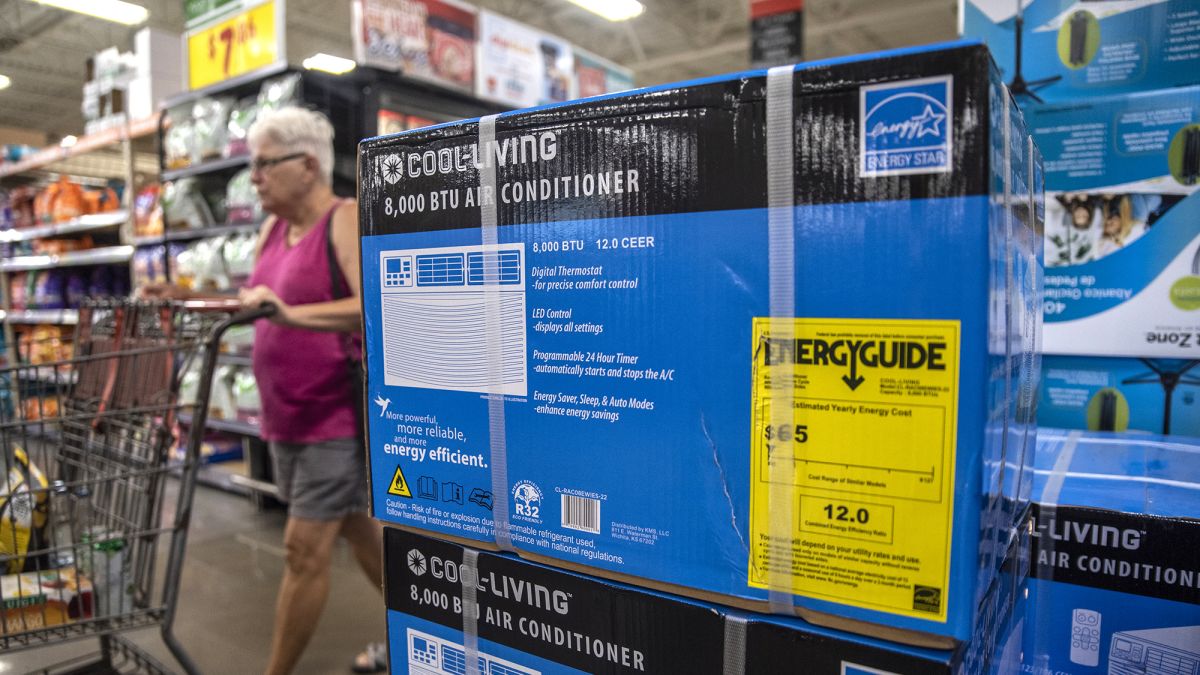 It keeps happening. Every summer, unprecedented heat surges through cities across the United States—in Washington, Oregon, and Idaho; in Illinois, Indiana, and Ohio; and in Maryland, Virginia, and New Jersey. Last week, a heat wave melted records in Texas with unrelenting highs well into the 100s for days. And just when residents need it most, the electrical grid fails. Every year, hundreds die from heat-related illness in the U.S., and thousands more end up in emergency rooms from heat stress. Compared to other weather-related disasters, the emergency response to extreme heat from U.S. leaders has been minimal. As a result, many places remain unprepared. How, then, do we make our cities more resilient?

The urban heat crisis is not confined to North America, of course. Extreme heat kills more people than any other climate disaster on the planet, including hurricanes, floods, and wildfires. In the U.K., temperatures are reaching 104ºF for the first time in recorded history, and the heat is stoking wildfires across Europe. In India, cities inhabited for centuries are now unlivable with highs of 123ºF. And, driven largely by carbon emissions from the developed world, climate change is making it worse. Heat waves are getting hotter, they’re happening more often, and they’re lasting longer. Currently, 2.2 billion people—that’s 30% of the world’s population—now experience life-threatening heat during at least 20 days of the year, and scientists predict that heat could threaten as many as 66% of human lives by the end of the century. Unlike more cinematic violence, heat is invisible, even as it’s more immediate and widespread. That also makes it more dangerous. Nothing but the massive reduction of fossil fuels will slow this trend.

Many of us living in the U.S. assume we have the best solution to this mess: air conditioning. The U.S. uses more energy for cooling per person than any other nation on the planet. In 2016, 328 million Americans—that’s less than 5% of the world’s population—guzzled more energy for cooling than the 4.4 billion people living in all of Africa, Latin America, the Middle East, and Asia, with the exception of China. (A big exception: more than half of global cooling-related emissions now come from China and the U.S. combined.) For comparison, the U.S. uses almost as much energy for cooling as the 1.2 billion people of Africa use for everything all year. Worldwide, demand for cooling is rising fast, and it’s still growing in the U.S., where it’s already ubiquitous. Today, 88% of U.S. homes use some form of air conditioning compared to about 4% of European homes. As summers grow hotter, Americans are cooling even more.

You would think, then, that in the most air-conditioned nation on Earth, we would have solved the extreme heat crisis. But while it seems like an obvious solution to our summer misery, our reliance on air conditioning looks uncertain as a viable solution in both the long- and short-term. In some cases, air conditioning might even exacerbate our crisis—and it’s clear that there are better, community-wide solutions we should be pursuing instead.

During the New York City heat wave of 2019, the limits of air conditioning as a universal solution to urban heat emergencies became obvious. On a Sunday in July, at the start of a three-day blaze that pushed the heat index to 113ºF, neighborhoods in Brooklyn and Queens lost electricity. Because the system handled a record-breaking load of energy—most of it to power room air conditioners—several sections of the southeast Brooklyn grid failed. In response, Con Ed, the investor-owned monopoly corporation that acts as the city’s public utility, intentionally cut power to an additional 33,000 residents in order “to prevent any further outages and also to protect the integrity of the energy system.” More than 50,000 residents—including seniors in several large care facilities, as well as infants—struggled without power for more than twenty-four hours. Perhaps most tellingly, those neighborhoods, particularly Canarsie and Flatlands, are predominantly Black (59%) and Latino (8%) working-class.

The logic here is troubling. Nor is it uncommon or limited to New York. It’s happening in cities around the country. Con Ed targeted the predominantly low-income Black and brown neighborhoods of southeastern Brooklyn as an appropriate buffer zone for the rest of Brooklyn and indeed the entire city. “Vital equipment” and “the integrity of the energy system” as a whole—that is, in the whiter, wealthier, more commercial districts—were privileged above the communities of Canarsie and Flatlands.

Heat waves touch almost every part of the planet’s surface, but cities generate a particular problem. In the U.S., extreme heat in cities—where more than 80% of Americans now live—kills an estimated 1,300 people a year. Tall, dense buildings; lack of leafy trees; waste heat from cars and buildings (including air conditioners); and heat-absorbing materials like asphalt and roofing all combine to create “urban heat islands.” On scorching afternoons, some urban neighborhoods can reach temperatures 15ºF hotter than outside the city. That could mean the difference between discomfort and death.

Like any weather-related disaster, urban heat islands affect populations unevenly. The elderly, children, and those with pre-existing conditions like diabetes, high blood pressure, or heart problems are especially vulnerable. So are those who work outside; the poor; the homeless; those without access to shade or water features like pools; those living alone; alcoholics; and those without secure access to healthcare.

Another way of putting that is that urban heat islands affect neighborhoodsunevenly. The NYC “Environment & Health Data Portal” notes that “the risk of illness or death related to heat waves is higher in communities with higher surface temperatures and less green space, and poor communities of color that have experienced historical racism and segregation.” In fact, communities that have historically experienced racism and segregation (e.g., redlining) are hotter because of that history. Less funding to plant trees in Harlem decades ago means less shade today, which means a hotter neighborhood than one just a few blocks south. In NYC, Black residents make up only 22% of the population, but they account for about 50% of the city’s heat fatalities. In cities across the U.S., median neighborhood income is a remarkably good indicator of density of vegetation.

Air conditioning divides us by race and class—especially during inflation. Since low-income neighborhoods of color are hotter, it can take more energy(i.e., more money) to cool homes in those communities to the same temperature as wealthier neighborhoods. In addition, a recent study found that Black residents spend hundreds of dollars more on energy bills than white residents even though they were 50% more likely to give up basic necessities and 40% more likely to keep the home at an unhealthy temperature to pay those higher bills. So even when Black households seem to have equal access to energy, the energy infrastructure continues to burden nonwhite residents more intensely than it does whites.

In a heat wave, we should, above all, ensure that everyone in the city remains safe by finding a reliable way to keep cool. For those who can, this means running individual AC units in residential spaces—at least, for now. But this response to heat emergencies doesn’t look like an emergency response at all. Nor does it work when the energy grid fails. It leaves survival up to individual consumer choice, which exposes the most vulnerable to deadly heat and reinforces the inequities already present in our cities.

What if we gave out ACs to everyone in need? Some cities like New York have programs to subsidize air conditioners and the energy to run them through programs like the Home Energy Assistance Program (HEAP), but these can be time-consuming or confusing to research and join. Activist groups like Harlem’s WE ACT work hard to connect residents to these programs and keep them cool, but in other cities, air conditioning is rarely subsidized for those who need it most. At best, these programs are a temporary fix. In a country that fails to see basic, life-sustaining healthcare as a human right, subsidized air conditioning for those who are struggling to survive seems, at best, unlikely, if not fantastical.

Our fixation with air conditioning is so intense that the only solution most of us can think to the air conditioning crisis is…more air conditioning. It misses the ultimate irony: air conditioning itself contributes significantly to global warming. Most AC units still use refrigerants that are powerful greenhouse gases (GHGs) thousands of times more potent at trapping heat in the atmosphere than carbon dioxide, the main GHG. Their direct leakage into the atmosphere counts for about 3% of U.S. emissions. Luckily, recent international agreements are phasing these chemicals out, but even so, their removal is far from guaranteed. Decades ago, another international agreement phased out CFCs, the previous refrigerants, but as recently as 2019, factories in east Asia began briefly manufacturing these ozone-depleting chemicals once more. It cut costs. And the banning of a chemical like this without incentive programs to destroy them responsibly invite smuggling rings that encourage production of the chemical well past its deadline.

The primary way air conditioning heats the planet is indirectly: energy. U.S. residents use about 17% of their annual electricity on air conditioning, although yearly averages hide geographic particularities and the fact that the most intense—or sometimes only—cooling happens during summer. On the hottest days, air conditioning accounts for as much as 70% of peak electricity demand. On the plus side, almost all energy for AC comes from electricity, which means that it is ready to run on renewable energy. But, at the moment, only 19% of electricity in the U.S. comes from renewables. Most of it still comes from fossil fuels, which translates to significant emissions.

The responsibility is not on citizens, whose only choices are whether to buy ACs and whether to turn them on. The responsibility rests on government leaders—the mayors, the city assemblies, and the urban designers that make decisions about green space, energy infrastructure, and building design. In the inevitable heatwaves to follow, the lives of the most vulnerable residents are in their hands.